Dr. James Pope: A professor on the move 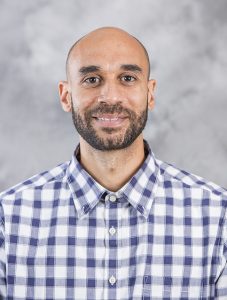 “The primary thing that motivates me is my extreme dislike of racism, colonialism and imperialism,” a reflective James (my father is known as Pope) shares. “There is a mantra that I was taught and live by: Your thoughts become words. Words become action. Actions become habits. Habits become character. Character becomes destiny.”

Pope believes that everyone should seek and struggle to develop their character to create a better world. “It is an actualization of the axiom that ‘no individual has any right to come into the world and go out of it, without leaving behind him distinct and legitimate reasons for having passed through it,” says James, quoting George Washington Carver. “And my reason is to consistently work to create the conditions for others to live in peace, equality and justice.”

Throughout his career, Pope has kept busy in the classroom and the wider world. He has been featured in ARTAfrica for his work with Africa World Now Project, an educational program that engages with various initiatives, merging history, culture and politics across the broad spectrum of Africa and its Diaspora. He is also Amnesty Internationals’ country Specialist on South Africa.

“What ‘Africa World Now Project’ brings is a direct and clear intent to explore all of the African world,” Pope says. “It seeks to understand the global connectivity of local and national issues that face Africa and African descent communities wherever they are found in the world.”

Pope spent his formative years between Philadelphia and Richmond, Virginia. He earned his bachelor’s and master’s degrees from Virginia Commonwealth University (VCU), and his Ph.D. from Howard University. Before he joined the faculty at WSSU, he taught at VCU in the Department of Africana Studies as well as Howard and Georgetown University.

Pope specializes in comparative African and diasporic history and politics as well as international relations. In addition to cultivating a research agenda that maps radical resistance traditions and intellectual continuities in sociopolitical thought and cultural behavior, he has taught courses exploring various dimensions of African and Diasporic historical and contemporary experiences.

In addition to teaching, James is in the process of completing a research project titled: An Africana Reader: An Anthology of Sociopolitical Thought and Cultural Resistance.. This anthology looks at the historiography of sociopolitical thought and cultural resistance as it forms in continuity and discontinuity throughout the African world. The project examines various writings from, on, and about continental Africa and Afro-descendant populations around the world.

This project has been published as a preliminary 2016 edition, with a full launch in January 2017.

Beyond his current research, James continues to write chapters for books, speak at lectures across the country and engage in collaborative knowledge exchanges.

His latest venture, in conjunction with other WSSU faculty, is an institutional program titled “Rethinking Afro-Cuban Studies in a New Era.” The program is designed to eventually become a student study abroad opportunity. Currently, members of the faculty in the program are exploring ways to creatively engage Cuban society. The program views Cuba as the epicenter of the Caribbean and the source of a knowing reciprocity between Africa and the diasporic communities across the globe. The emphasis on this examination of Afro-Cuba is unique and promises to increase instructional modules in existing curricula, and foster research of the complex and interrelated issues of culture, health, education, and community development, he said.

True to his form, James has already embarked on his next project titled “Discourses on Race, Culture, and Critical Human Rights Consciousness: Contributions from the Black Left,” which explores how Africana critical consciousness formations expand ideas about citizenship, (human) rights, and justice. Specifically, this project examines how the Black Radical Tradition, critical consciousness formation, movements, and their epistemological and ontological productions interact to produce rich sources from which we can draw upon to (re)conceptualize the way we think about humanity.

Pope is interested in the praxis of all his research; the relationship between theory conceptualization and practice. “This way of thinking is directly related to the axiom with which I seek to live by,” he said. “The measure of knowledge is the circumference of your activity.”