Bakari Sellers, who made history in 2006 as the youngest African American elected official in the nation, will be the speaker at Winston-Salem State University’s 2017 Commencement Ceremony at 9:45 a.m. on Friday, May 19.

At age 22, Sellers defeated a 26-year incumbent state representative to become the youngest member of the South Carolina State Legislature, serving from 2006-14. In 2014, he was the Democratic nominee for South Carolina lieutenant governor. More recently, he has served as a political commentator and analyst for CNN and MSNBC.

“We are honored to have Bakari Sellers as our commencement speaker,” said Chancellor Elwood L. Robinson. “Rep. Sellers has shown a commitment to championing social justice and is widely considered a political rising star. I know his message will be thought-provoking and uplifting for our graduates as they prepare to leave WSSU and begin the next chapters of their lives.”

He earned his undergraduate degree from Morehouse College, where he served as student body president, and his law degree from the University of South Carolina. Sellers then followed in the footsteps of his father, civil rights leader and educator Dr. Cleveland Sellers, in his commitment to service, addressing issues ranging from education and poverty to preventing domestic violence and childhood obesity.

Sellers served on President Barack Obama’s South Carolina steering committee during the 2008 election and spoke at the 2008 Democratic National Convention.

In 2010, he was named to Time magazine’s “40 Under 40,” and in 2014 made The Root’s list of the nation’s 100 most influential African Americans. He has provided commentary and analysis for CNN and MSNBC, including multiple appearances on “Hardball with Chris Matthews” and “Morning Joe.”

Sellers practices law with the Strom Law Firm in Columbia, South Carolina. He is married to Dr. Ellen Rucker-Sellers.

The ceremony will recognize more than 1,200 graduates who received their degrees during summer and fall 2016 and spring 2017. This includes:

The ceremony will be held, weather permitting, at Bowman Gray Stadium. The rain location is Winston-Salem’s Lawrence Joel Veterans Memorial Coliseum. For those who cannot attend, the ceremony will be live-streamed on WSSU’s website. 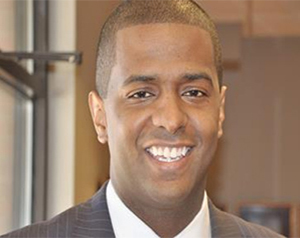