The extension of Research Parkway is scheduled to open on Wednesday, July 12, creating a new interchange on U.S. 52 for drivers entering Winston-Salem State University’s campus and Bowman Gray Stadium. The exit/entrance ramps at Rams Drive (108C) will close permanently.

The Rams Drive bridge over U.S. 52 is being replaced as part of the project.

U.S. 52 from Interstate 40 to Business 40 will be closed from late on Friday, July 21, through Sunday, July 23, for removal of the bridge. Rams Drive then will be closed to through traffic for construction of a new bridge. The project will be completed by December.

WSSU is working closely with the City of Winston-Salem to communicate the changes to various campus visitors. 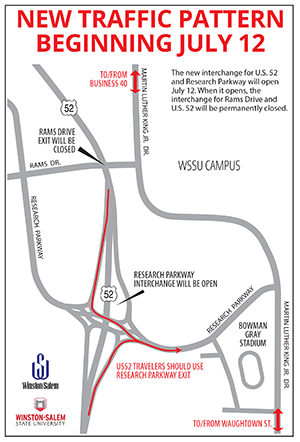