Winston-Salem State University’s (WSSU) Class of 2021 didn't let a little rain stop them on their first big day. More than 950 freshmen and their families arrived on campus for move-in day starting at 8 a.m. on Saturday, Aug. 12.

As families drove up to their residence halls, they were greeted by WSSU’s “Move-In Crew,” dozens of upperclassmen, including students from the Renaissance Minority Male Mentoring Program, Ramdition legacy leaders and student-athletes. The crew welcomed families, and helped unload vehicles and haul all the essentials up to new students’ rooms.

The class of 2021 is WSSU’s largest freshman class in nearly a decade. Ramdition, WSSU’s weeklong student orientation, starts on Sunday, Aug. 13, and continues through Saturday, Aug. 19, with the Through the Archway. Classes at WSSU start on Monday, Aug. 21. 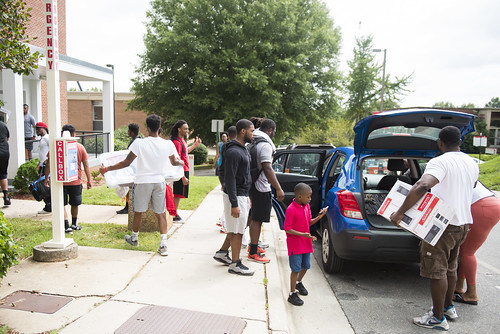