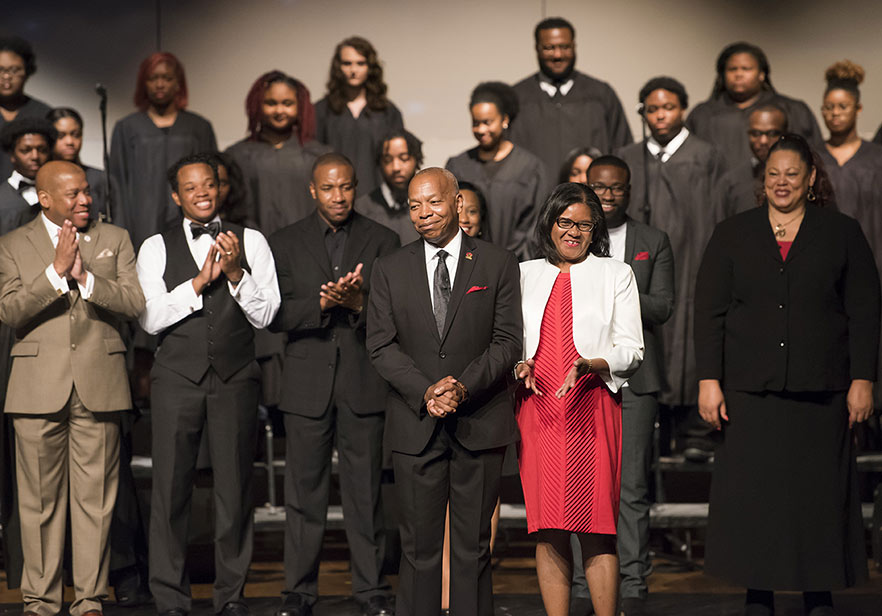 Chancellor Robinson and Mrs. Robinson along with the "I Dream A World" cast and the Singing Rams on stage in K.R. Williams Auditorium after the production.

Winston-Salem State University (WSSU) took time to honor its visionary founder during a day of events marking its 125th anniversary on Sept. 28.

WSSU commemorated Dr. Simon Green Atkins with an original mixed performance production, “I Dream a World: The Life and Dreams of Simon Green Atkins.” The program, which incorporated the talents of faculty, staff, students and community members, told the story of Atkins, a man who had an audacious dream to create a university that would educate the children and grandchildren of recently freed slaves with the same excellence and ideals as Ivy League schools.

The event, with an audience of about 1,200 people at K.R. Williams Auditorium, included performances by the WSSU Choir, the Burke Singers and actors portraying Dr. Atkins and his wife, Oleona Pegram Atkins.

A highlight of the program was a message from WSSU Chancellor Elwood L. Robinson.

“Simon Green Atkins started a revolution like no other,” Robinson said. “Creating this school in 1892, he was a brilliant individual with a great mind who had a pedigree like none other. We find him among some of the greatest scholars of the day. He believed it was about educating, not individuals or mechanics, but educating the entire human being – the heart, the soul and the mind. He orchestrated a different kind of educational experience for recently freed slaves. So, every day at Winston-Salem State University, the work that is done here is centered around that historic vision.”

At the conclusion of the program, the Atkins family joined the cast, choir and Chancellor Robinson on stage for the singing of the alma mater. 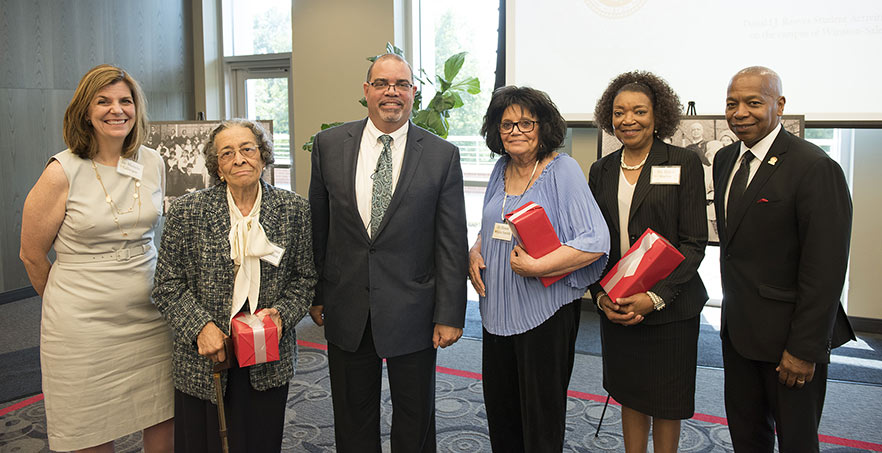 “When I was a little girl, and I was born on this campus, it looked different,” Smith said. “The streets weren’t paved. The areas were grassy. There were no more than six buildings, and when I think about the way it has magnified itself, the different buildings, the different areas, it just amazes me. It’s just marvelous, and Papa Atkins would just say, ‘Wow!’ ”

The commemoration Thursday also included a birthday party in the K.R. Williams Sculpture Garden with cake and jazz music.

WSSU is continuing its 125th celebration week with the Second annual Winston-Salem Football Classic on Friday-Saturday (Sept. 29-30). The football game, in historic Bowman Gray Stadium, will include a special halftime performance from the Red Sea of Sound featuring national recording artist Earnest Pugh and a 125th anniversary community chorale. Following the game, fireworks will light up the sky in honor of WSSU’s birthday.

WSSU was founded on Sept. 28, 1892, as the Slater Industrial Academy, in a one-room frame structure with 25 students and one teacher. Today, WSSU has just more than 5,000 students and offers nearly 50 degree programs, including and two doctoral programs.

For 125 years, Winston-Salem State University has fostered the creative thinking, analytical problem-solving, and depth of character needed to transform the world. Rooted in liberal education, WSSU’s curriculum prepares students to be thought leaders who have the skills and knowledge needed to develop innovative solutions to complex problems. WSSU is a historically Black constituent institution of the University of North Carolina with a rich tradition of contributing to the social, cultural, intellectual, and economic growth of North Carolina, the region and beyond. Guided by the motto, “Enter to Learn. Depart to Serve,” WSSU develops leaders who advance social justice by serving the world with compassion and commitment. Join us in celebrating our 125th anniversary with events throughout 2017. Learn more at www.wssu.edu/125.