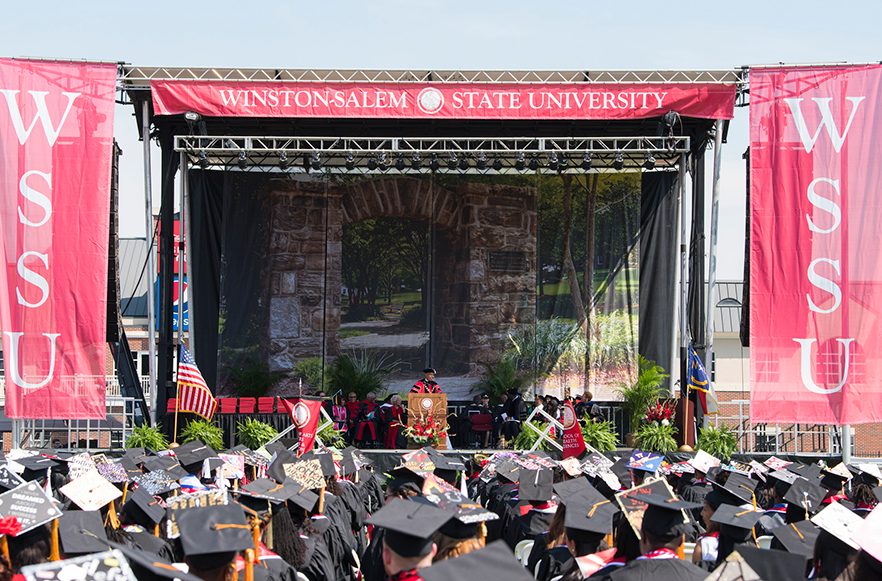 For the fourth straight year, Winston-Salem State University (WSSU) has earned a spot as one of the top four-year colleges and universities in the nation for providing the best opportunities for low-income students.

WSSU is no. 9 on CollegeNET’s 2017 Social Mobility Index (SMI) rankings, which were released on Tuesday, Oct. 24. WSSU is one of only five colleges or universities in the nation – and the only one on the East Coast –  to rank in the top 20 each year of the rankings.

“I am thrilled that Winston-Salem State University is once again recognized as a leader in social mobility,” says WSSU Chancellor Elwood L. Robinson. “Through a culture of engagement, innovative programs and community partnerships, we are helping to make the American dream a reality for under-resourced students. Our efforts are transforming, not only the lives of our students and their families, but also their communities, our state and our nation.”

In 2014, technology provider CollegeNET created the SMI, a data driven system that ranks U.S. colleges and universities according to how effectively they enroll students from low-income backgrounds and graduate them into promising careers. The SMI evaluates colleges and universities based on admissions practices that work to reverse the growing economic disparity in the United States.

WSSU scored high in four key variables considered in the ranking: low tuition cost, the number of low-income students admitted, graduation rate, and high employment outcomes after graduation. According to the study, a “high SMI ranking means that a college is contributing in a responsible way to solving the dangerous problem of economic immobility in our country.”

WSSU is the only university in the Southeast and the only historically Black college and university to rank in this year's SMI top 20.

“Unlike other college rankings that are aimed primarily at helping students select a college,” says Jim Wolfston, CEO of CollegeNET, “the SMI helps policymakers determine which colleges are addressing the national problem of economic mobility. Administrators have a better chance to help strengthen U.S. economic mobility and the promise of the American Dream if they can identify and learn from colleges that are skilled at doing this.”

To view the full rankings and the methodology for the SMI, visit www.socialmobilityindex.org.

In February, CollegeNET, in recognition of WSSU’s innovative practices, recognized the university as a "social mobility innovator."

For 125 years, Winston-Salem State University has fostered the creative thinking, analytical problem-solving, and depth of character needed to transform the world. Rooted in liberal education, WSSU’s curriculum prepares students to be thought leaders who have the skills and knowledge needed to develop innovative solutions to complex problems. WSSU is a historically Black constituent institution of the University of North Carolina with a rich tradition of contributing to the social, cultural, intellectual, and economic growth of North Carolina, the region and beyond. Guided by the motto, “Enter to Learn. Depart to Serve,” WSSU develops leaders who advance social justice by serving the world with compassion and commitment. Join us in celebrating our 125th anniversary with events throughout 2017.