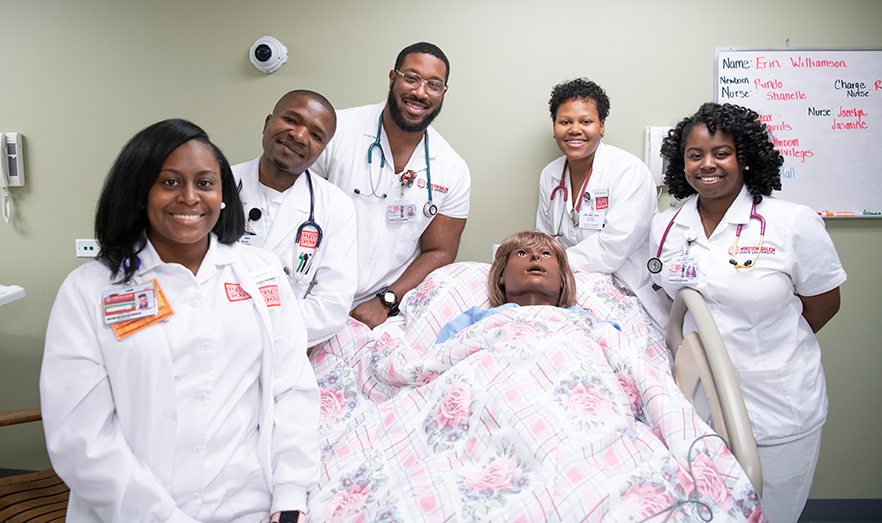 WSSU nursing students train in the virtual hospital at the Enterprise Center.

“We are humbled to have two of our programs recognized as the best among the nation’s HBCUs by HBCU Digest,” said WSSU Chancellor Elwood L. Robinson. “This is testament to the exceptional faculty who give their best each and every day to make sure that our students succeed.”

The awards were presented at a ceremony in Baltimore. WSSU is the only North Carolina-based HBCU (historically Black college and university) to win multiple awards.

From the start of their junior year, faculty work one-on-one with students to identify their ultimate goals and to make sure they are prepared though a program called RAMREADY. Of the social work majors who took advantage of the program, 93.75 percent were offered employment or graduate school admission by the time of graduation, Byrd said.

For students who are looking for immediate employment, the faculty work one-on-one with students in their senior year to develop their job-seeking and interviewing skills. Further, a social work faculty member is assigned to work with each senior who desires to attend graduate school, providing guidance and information.

The social work program, which launched in 2008, also offers a number of programs for its students, including:

WSSU’s Division of Nursing is one of the nation’s premier nursing schools, offering programs in the baccalaureate, master’s and doctoral levels. In 2017, Diverse Issues in Higher Education ranked WSSU no. 1 in North Carolina for graduating African Americans in the fields of nursing and health professions.

WSSU also ranks as a top 10 nursing school in the eastern United States and is ranked in the top 10 percent for value.

In January, WSSU became the first North Carolina-based university to offer competency-based program for nurses who are ready to pursue a bachelor’s degree. In November, the division expanded its partnership with Hubei University of Chinese Medicine for WSSU nursing students and faculty to study in China.

WSSU was also a finalist in seven categories:

According to HBCU Digest, The HBCU Awards is the first and only national awards ceremony honoring individual and institutional achievement at historically Black colleges and universities throughout the country. Winners are selected by a panel of previous winners, journalists, HBCU executives, students and alumni for the merit of accomplishment and for generating positive coverage for HBCU campus communities.

More than 700 nominations were received for this year’s nomination process, an event record.

Both winning programs are part of WSSU's School of Health Sciences, an ethnically diverse school that embraces health equity in education, research and service. Signature programs include master of science in occupational therapy, clinical doctoral degrees in nursing and physical therapy, and a bridge to the Ph.D. in nursing with Duke University. For more information, please visit the SOHS website.

WSSU has received nearly $2 million in new grants from the National Science Foundation NSF that will expand research opportunities for undergraduate and graduate students at the university.