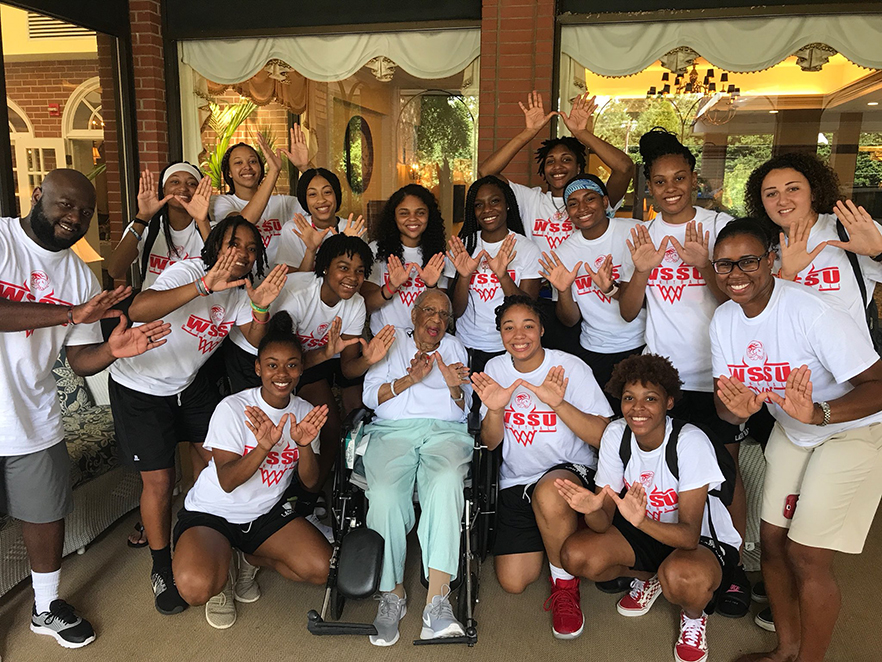 Henrietta Cross Hatton Clark, a 1938 WSSU graduate, gets a visit from the women's basketball team and coaching staff.

Henrietta Cross Hatton Clark has seen a lot since graduating from Winston-Salem Teachers College in 1938.

The retired teacher, who will turn 104 in September, says she owes everything to TC, now Winston-Salem State University (WSSU).

As a student, she played basketball on the women's team. As an alumna, she founded the alumni association chapter in her hometown of Henderson.

She says she has tried to stay in the know of the goings on at her alma mater, but it’s not easy at 103. In early August, Chancellor Elwood L. Robinson received an email from Carter B. Cue ‘88, former university archivist, who met Clark on a visit to her nursing facility in Durham. In the email, Cue says Clark asked that he “tell some Winston-Salem people to come see me.”

Soon-after, Robinson and his wife, Denise, paid a visit to one of WSSU’s oldest living alumni, dropping off a WSSU Rams blanket. A few days later, L’Tona Lamonte ’99, head women’s basketball coach, visited Clark, surprising her with a team photo from 1935.

On Friday, Aug. 17, Clark received the biggest surprise yet, a visit from the entire WSSU women’s basketball team. She was presented with a basketball signed by the team.

WFMY-TV was there as the Rams surprised Clark.

When Clark was a student at TC, there was an enrollment of about 550 students and 22 faculty members. The college offered one bachelor’s degree, education. Frances Loguen Atkins, who Clark calls “Papa Atkins,” was college president.

Her classmates included a number of Ram notables, including Dr. Edward O. Diggs ‘38, the first African American admitted to UNC Chapel Hill’s Medical School who passed away in 2017; Spurgeon Ellington ‘39, a member of the famed Tuskegee Airmen; Imogene Brown Ellis ‘38, the first president of the Alumni Association; and Lorraine Morton ‘38, the first African-American mayor of Evanston, Illinois, who will turn 100 in December. 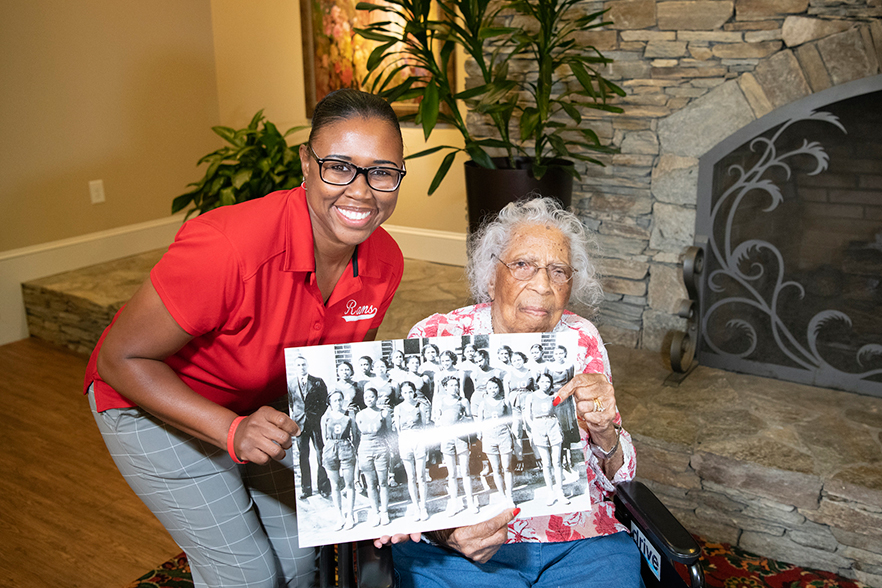