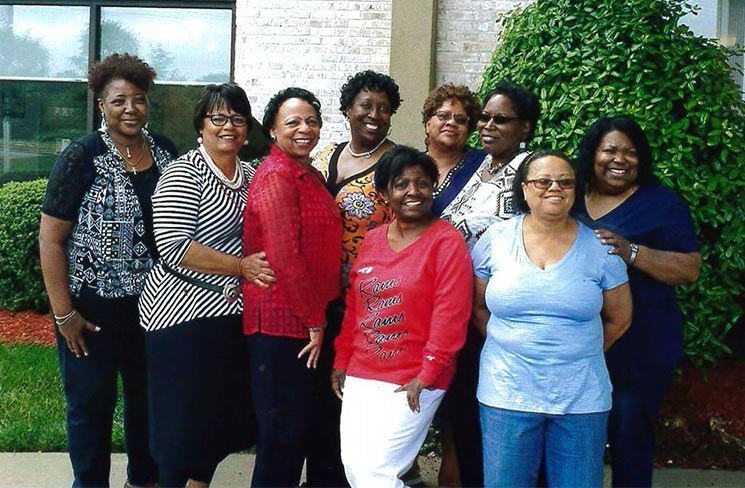 The year was 1976. Eight young women, entering college for the first time, received their room assignments for Pegram Hall. Little did they know that they would begin a friendship that would span five decades.

Patricia Taborn ‘80, one of eight “WSSU Sisters,” says they were strangers from various parts of North Carolina when they arrived on Winston-Salem State University’s campus, but their similarity made them sisters.

“We all came from humble beginnings,” says Taborn, a registered nurse at Duke University Medical Center. “We’ve learned to love and support one another, which tightened our bond.”

This group of young ladies soon became inseparable. Their best memories together include their study sessions during the and their fun-filled weekends.

“Some of our most memorable times at WSSU, especially as new freshmen, are studying together during the week and going to the student union dances on Friday nights,” Taborn says. “Then the football games on Saturdays at the stadium. We didn’t know much about football, but when WSSU made a touchdown, we cheered like crazy.”

“Bojangles’ chicken had just come on the scene, and if we had a few dollars to purchase two chicken legs and dirty rice, we were and walked several miles to get it,” she says. “On Sundays, we would enjoy an off-campus meal at Libby Hill Seafood, when we could get a ride there.”

After graduating in 1980, they explored different career paths and started families, but have remained close friends.

“One year during Homecoming, a few of us decided to meet up,” Taborn says. “The reunion was wonderful. It was heartwarming to reconnect under one roof again. We decided to meet and spend the weekend together as WSSU sisters. It has proven to be very therapeutic for all of us.”

For over a decade, they have continued to meet yearly, with each sister planning and hosting reunions in her hometown. Some of their stops include Virginia Beach, Durham, Greensboro, Jacksonville, Raleigh and, of course, Winston-Salem, where it all began.

“Many of our family members have been ill, and we have lost loved ones, but we make sure each of us bases with phone calls, prayers, and other acts of kindness,” Taborn says. “We were very supportive of each other at WSSU, and we remain supportive even more so today. When we speak about our bond with others, including fellow classmates, they are often amazed and intrigued that we’ve remained so close,”