Alumna, WWII vet will have her wish granted at WSSU’s 2019 Commencement 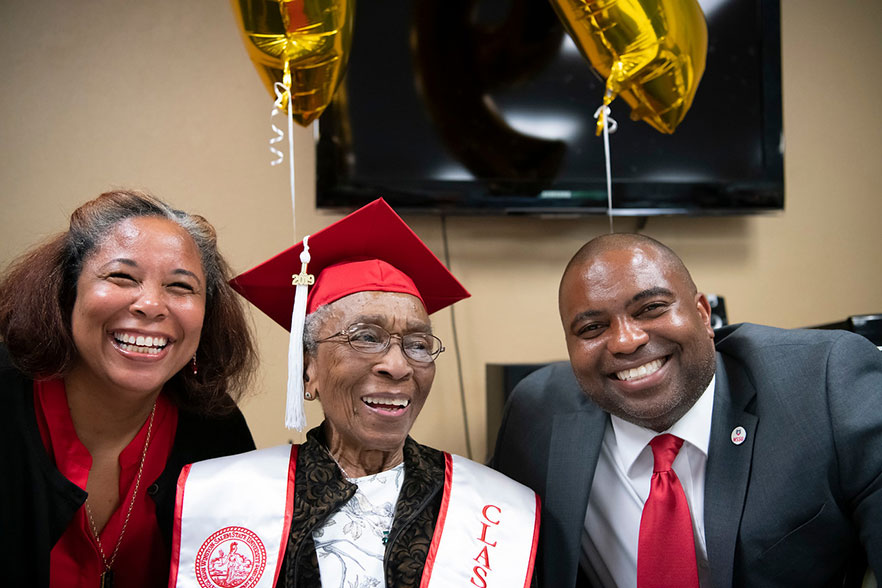 PFC Elizabeth Barker Johnson’s life has been a series of historic milestones.

In 1943, the Elkin native answered Uncle Sam’s call and enlisted in the U.S. Army. She became a member of the 6888th regiment, the only all-female, African American Women’s Army Corps battalion to serve overseas during World War II.

After the war, she made history again as the first female to enroll at what was then Winston-Salem Teachers College on the GI Bill. She earned a degree in education in August 1949.

For Johnson, who turned 99 on Thursday, May 2, there’s still one thing that she hasn’t accomplished: Walking across the stage at graduation.

On May 10, nearly 70 years after earning her degree, she’ll get her wish.

She was surprised with the news at a 99th birthday party with family there to cheer her on. Her big surprise was opening a gift from her alma mater, a WSSU red cap and gown that she will wear at the ceremony at Winston-Salem’s Lawrence Joel Veterans Memorial Coliseum, where she’ll share the stage with Rams from the class of 2019.

Dr. Darryl Scriven, dean of the College of Arts, Sciences, Business and Education, and Dr. Shannon Mathews, interim associate dean of The College, presented Johnson with the gift.

A Life of Service

Johnson began teaching in Virginia immediately after graduating from WSSU and was unable to attend commencement because she couldn’t find someone to substitute for her.

Johnson taught public school for more than 30 years. The bulk of that time was for Elkin City Schools, which is where she grew up.

Education wasn’t easy for Johnson. Because there was no high school for Black students in her segregated hometown, she had to travel to Winston-Salem and graduated from Atkins High School.

“From serving her country during World War II to impacting the lives of hundreds of students as a classroom teacher in North Carolina and Virginia, PFC Elizabeth Barker Johnson is the embodiment of Winston-Salem State’s motto, ‘Enter to Learn. Depart to Serve,’ ” said Elwood L. Robinson, WSSU chancellor. “We are inspired by her and excited to give her the opportunity, 70 years later, to finally walk across stage for commencement.”

A total of 855 African American women went overseas tasked with clearing a massive backlog of letters from loved ones to their soldiers overseas during World War II.

Johnson joined the U.S. Army Women’s Corps, which took her to Massachusetts for training and them to Kentucky. Soon after, she was sent to England for three months and later France, where she spent most of her time. She served as a truck driver.

Barker – who has two children, two grandchildren and one great-grandchild and another on the way – is only of only five surviving members of the 6888th.

The women of the 6888th Battalion were not publicly recognized for their contributions in WWII until recently.

In November, a monument was unveiled in their honor at Fort Leavenworth in Kansas Johnson’s name is one of 855 engraved on the memorial.

The ceremony will recognize more than 1,100 WSSU graduates who received their degrees during the summer and fall of 2018 and spring 2019.

Commencement begins at 8:45 a.m. and will be held at Winston-Salem’s Lawrence Joel Veterans Memorial Coliseum. For those who cannot attend, the ceremony will be live-streamed on WSSU’s website. 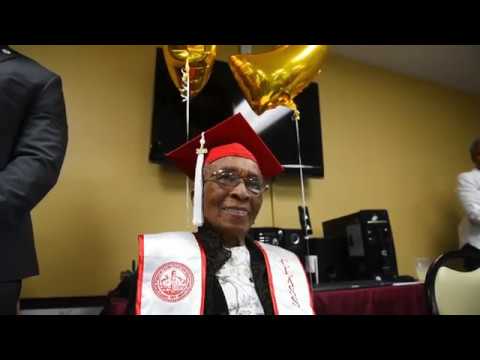