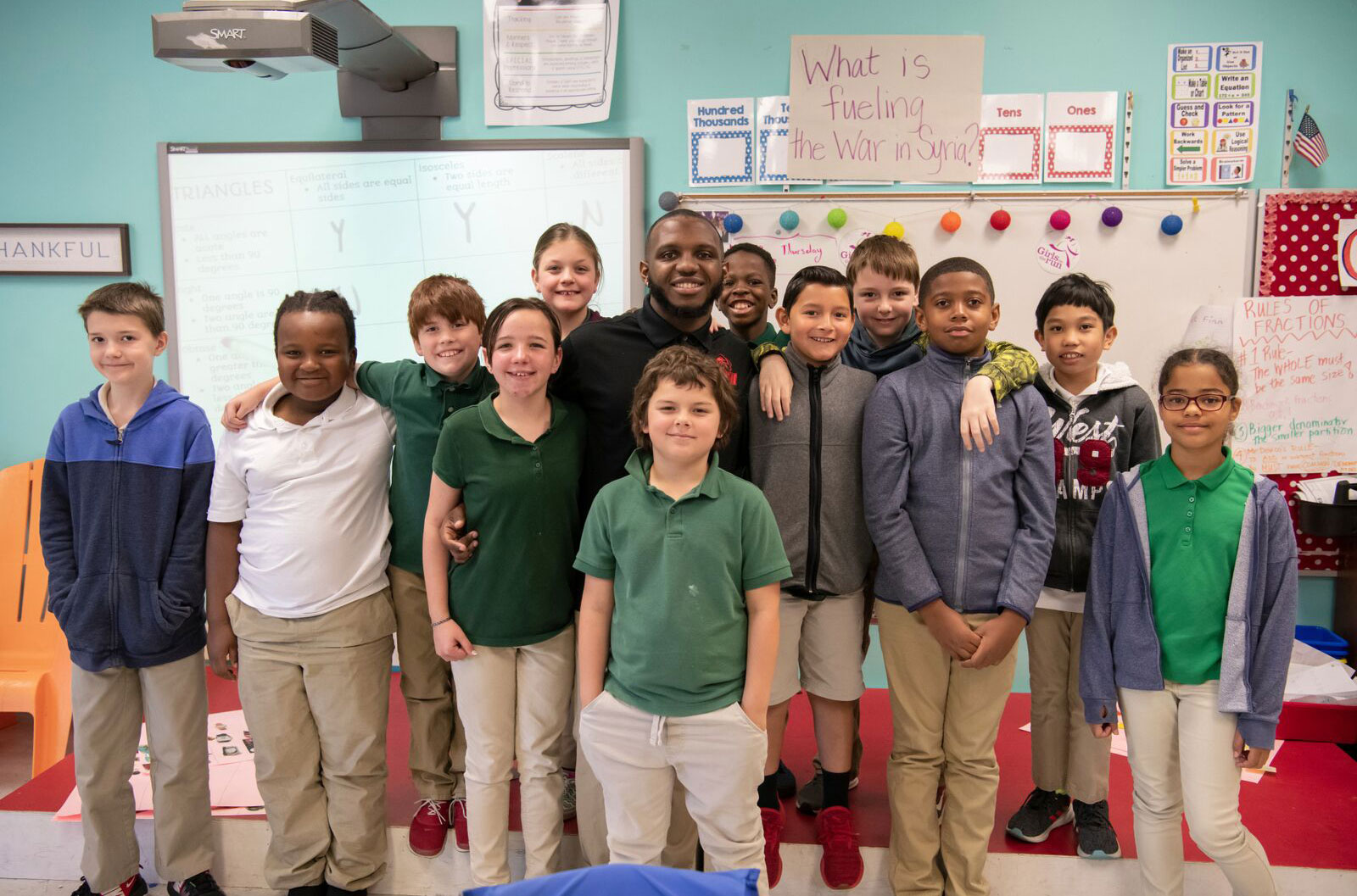 Another Winston-Salem State University (WSSU) Commencement is upon us, as graduates depart to serve. Here's a glimpse of where a few students from the Class of 2019 are headed.

This fall, Devin Rankin will become a third-generation educator, following in the footsteps of his mother, grandmother and grandfather. As a student at WSSU, Rankin was Mr. Junior, Mr. 1892 and a member of the Red Sea of Sound.

How has WSSU prepared you for your ultimate goal?
“WSSU has given me the necessary skills I need to be successful in this forever changing world. I learned the importance of time management and working within my passion. WSSU also taught me how to be tenacious. Nothing worth having comes easy.”

Next Step: He will teach in Winston-Salem/Forsyth County Schools. Working at Moore Elementary as a student teacher this semester, he says he fell in love with the area. Within the next three years, he plans to have an after-school program in four different elementary schools to focus on mentoring, tutoring, and social and emotional growth. 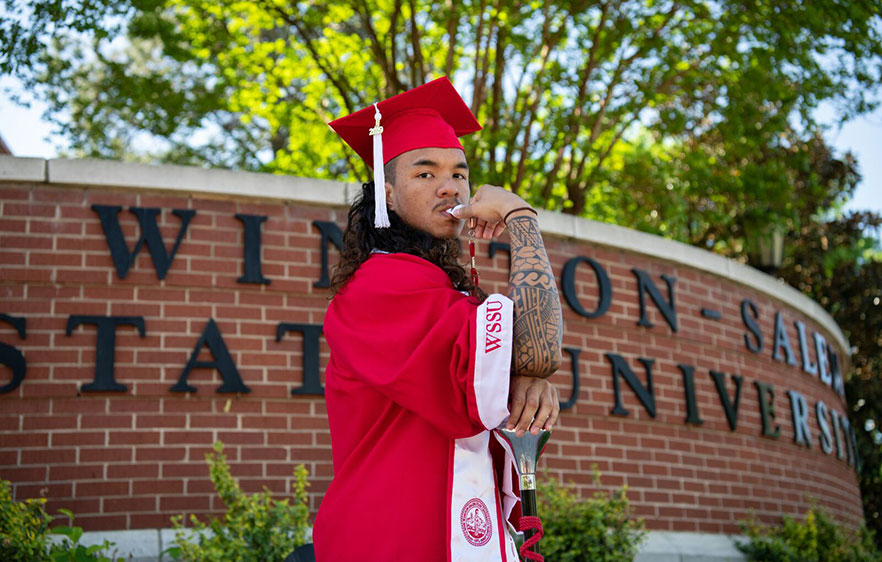 Greg Hughes took as many as 21 credit hours per semester while dedicating up to 40 hours a week to band practices and appearances as a drum major for the Red Sea of Sound marching band. As drum major, he performed on some of the biggest stages, including performing for a music video that aired on ESPN’s “First Take,” and in a promotional video for the Winston-Salem Chamber of Commerce.

How did WSSU help make you the person you are today?
“WSSU didn't make me the man I am today, but rather it helped me morph into the man that I am, guiding me into the right direction and bringing more of the positive and helpful spirit out of me.”

Next Step: He will continue to run his six different businesses, which includes stocks, real estate properties, a car dealership and selling items over Amazon and eBay. 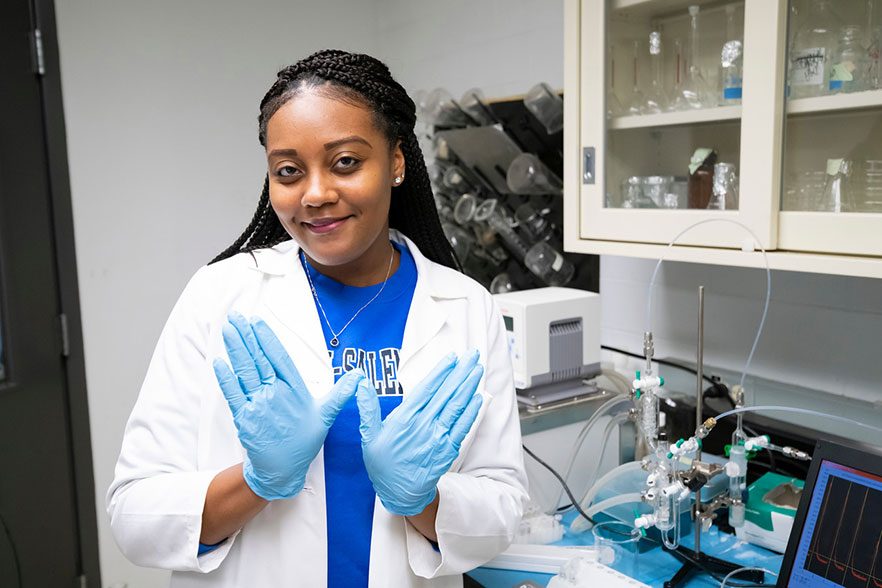 Zakiyah Henry was part of the MARC U*STAR Program, which is supported by the National Institutes of Health (NIH) and designed to increase participation of students in biomedical/behavioral research. Through the program, she has been actively working in the lab of Dr. Tennille Presley, whose research focuses on Type II diabetes. Henry also is a member of Zeta Phi Beta Sorority and Beta Beta Beta, a national biological honors society.

How has research helped you reach your goal?
"Research has been instrumental in my decision to want to go into the field of Toxicology. I have had two different research experiences in toxicology that helped me build my interest."

Next step: She will be attending Rutgers University in New Jersey to obtain a Ph.D. in toxicology.

What’s will you miss most about WSSU?
“I will miss the culture and the people the most. Winston-Salem State University created such an open environment that allowed me to be myself and blossom into the professional I’m aspiring to be. I’ve also developed lifelong relationships that have woven into my support system that continuously encouraged me on this journey to graduation”

Next Step: She will work at Horizons Residential Center with the administrative staff where she completed her spring internship. She also plans to apply for graduate school. 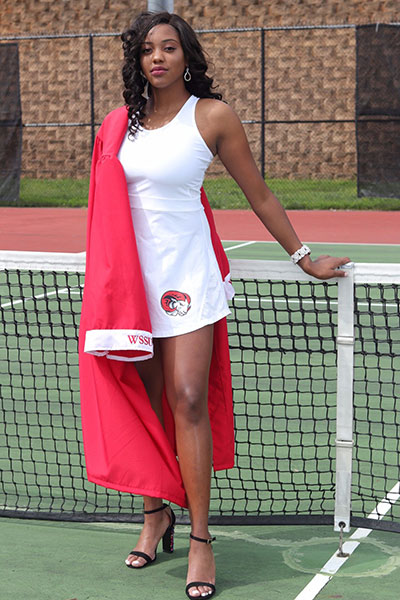 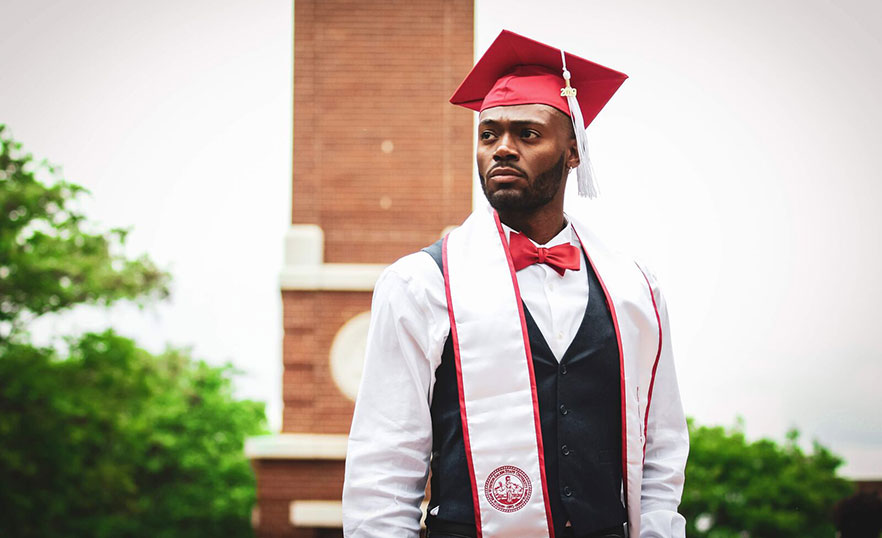 How has WSSU prepared you for life after college?
“Winston-Salem State University has prepared me for life after college in so many ways, but the biggest factor in which I will take away from WSSU is learning how to be yourself no matter what because people are always going to accept you and to also network with anyone possible.”

Next Step: He will attend the University of North Carolina at Greensboro’s Bryan School of Business to obtain an MBA in finance. 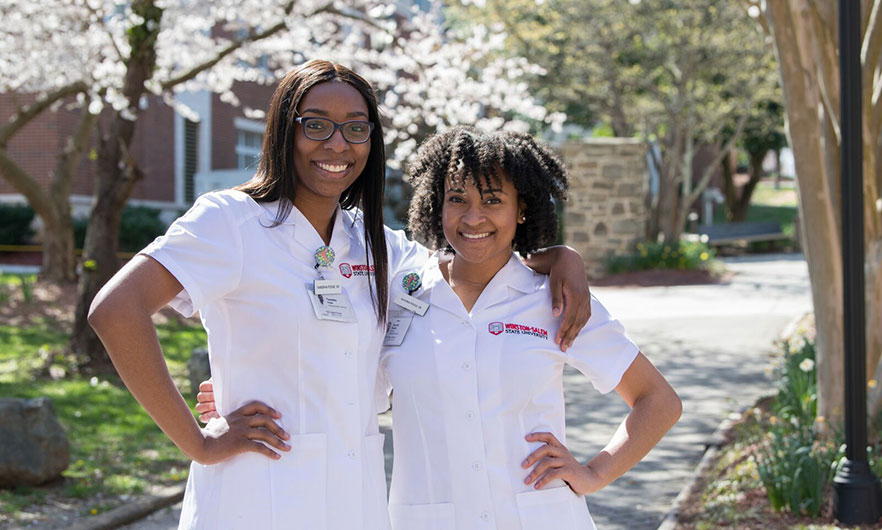 Sisters Tavoria and Taneshia Poole, from Jacksonville, consider themselves more than just siblings, they are best friends. They are the oldest of seven children and the first to graduate from college. At the commencement on May 10, they walked on stage together to receive their Bachelor of Science in Nursing (BSN) degrees.

What has it been like to have your sister there with you through your time at WSSU?
“Having my sister with me during my journey at WSSU was amazing. I’ve always had someone I could talk to about any and everything, especially nursing. Just having her here with me made my college experience even better.”

Next Step: She will start her nursing career in the neuro-med surgical unit at the Cleveland Clinic in Ohio,

How did WSSU prepare you for your future?
“WSSU Prepared me for my future because it gave me opportunities that I didn't know I had. My nursing professors taught me how to be a competent caring nurse. I joined the WSSU Army ROTC that gave me the leadership qualities and characteristics that I am able to use as an officer and as a nurse. So, thank you WSSU for molding me into the woman I’m destined to be, I’m finally in a place to use what you all have taught me.”

Next Step: She has been commissioned into the U.S. Army Nursing Corps as an officer and will serve as a nurse at Walter Reed Medical Center in Bethesda, Maryland.

Amber Romero, one of five children, is the first in her family to graduate from college. She transferred to WSSU from Forsyth Technical Community College. At WSSU, she was a member of Beta Alpha Psi, an international honor society for accounting, finance and information systems students; the National Association of Black Accountants; and Tau Sigma National Honors Society. She also volunteered for the Center for Smart Financial Choices.

How has WSSU prepared you for your ultimate goal?
“I have gained my educational foundation and the mentors that have helped guide me and prepare me for my future accounting career.”

Next Step: This summer, she will begin a third internship at PricewaterhouseCoopers, one of the Big Four accounting firms, with hopes of gaining a full-time employment offer. Romero plans to attend a master of accountancy program in the fall. 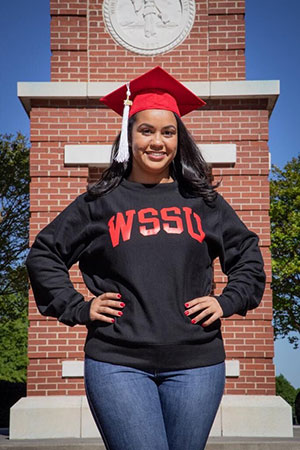 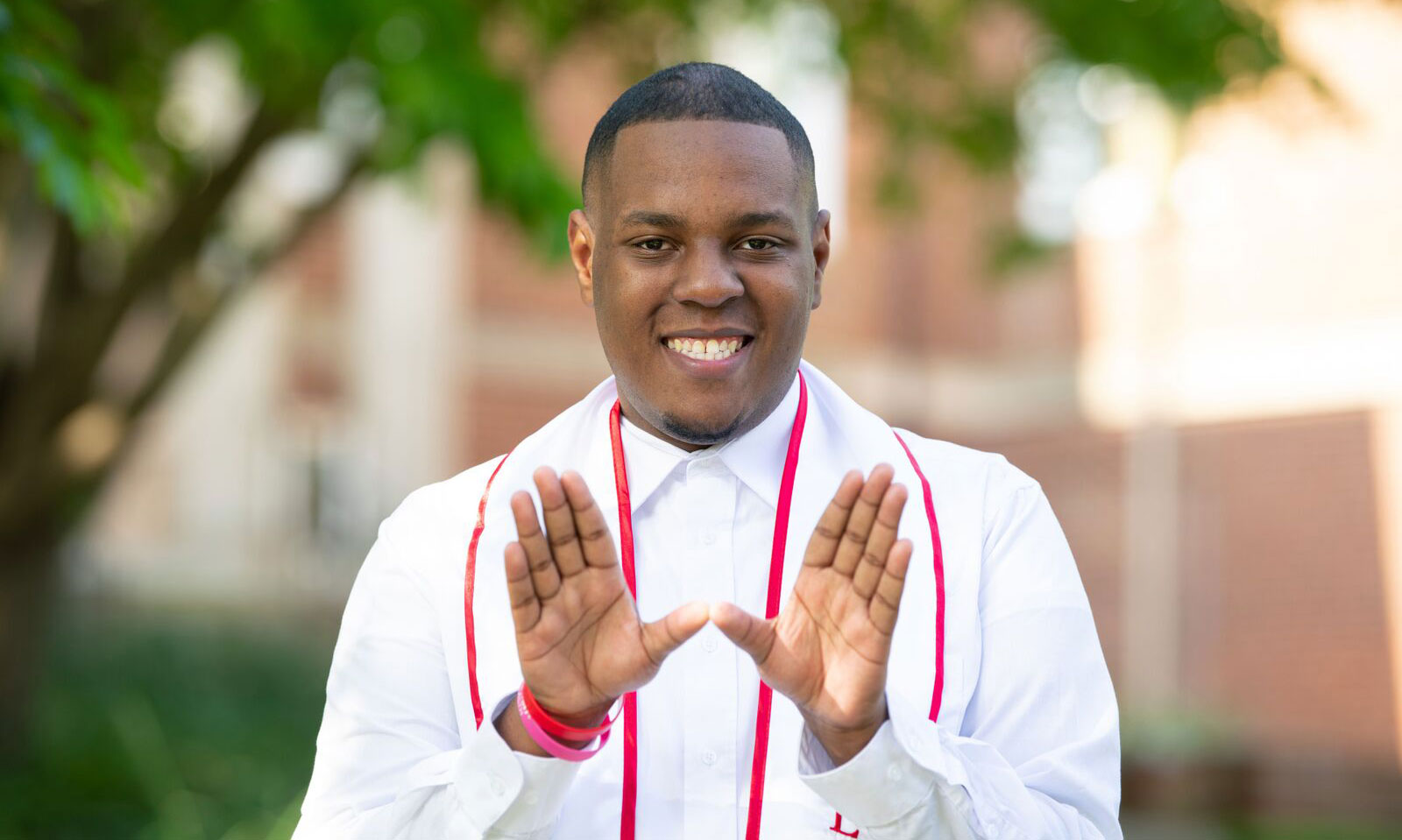 As a student at WSSU, Justin Hughes battled through adversity as his mother passed due to cancer. At WSSU, he interned and volunteered in the Athletics Department.

How did WSSU prepare you for the future?
“WSSU prepared me for the future by giving me all the tools to be successful. The professors, staff members, everyone that I have encountered has done everything they could to help me get to where I’m trying to go. WSSU has helped me so much and I can’t thank them enough.”

Next Step: He will work for the NFL Houston Texans during the 2019-20 season as a member of the game day operations staff. 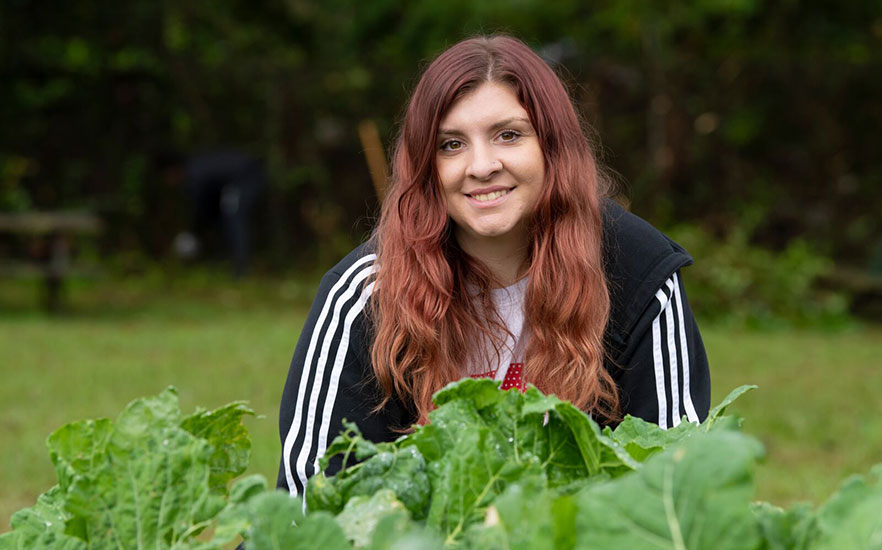 Miranda Legg is passionate about recycling. In 2018, that passion helped WSSU win $30,000 in a nationwide recycling contest from Garnier Rinse, Recycle, Repeat: College Competition. Legg, a Provost’s Scholar and member of the S.G. Atkins Honors Society, also received a $2,000 scholarship.

What advice would you give someone thinking about attending WSSU?
“Attending WSSU was the best decision I ever made. When you attend Winston you’re not just getting an education, you gain a family.”

Next Step: She is moving to Costa Rica for a year to teach English. When she returns, she plans to attend graduate school. 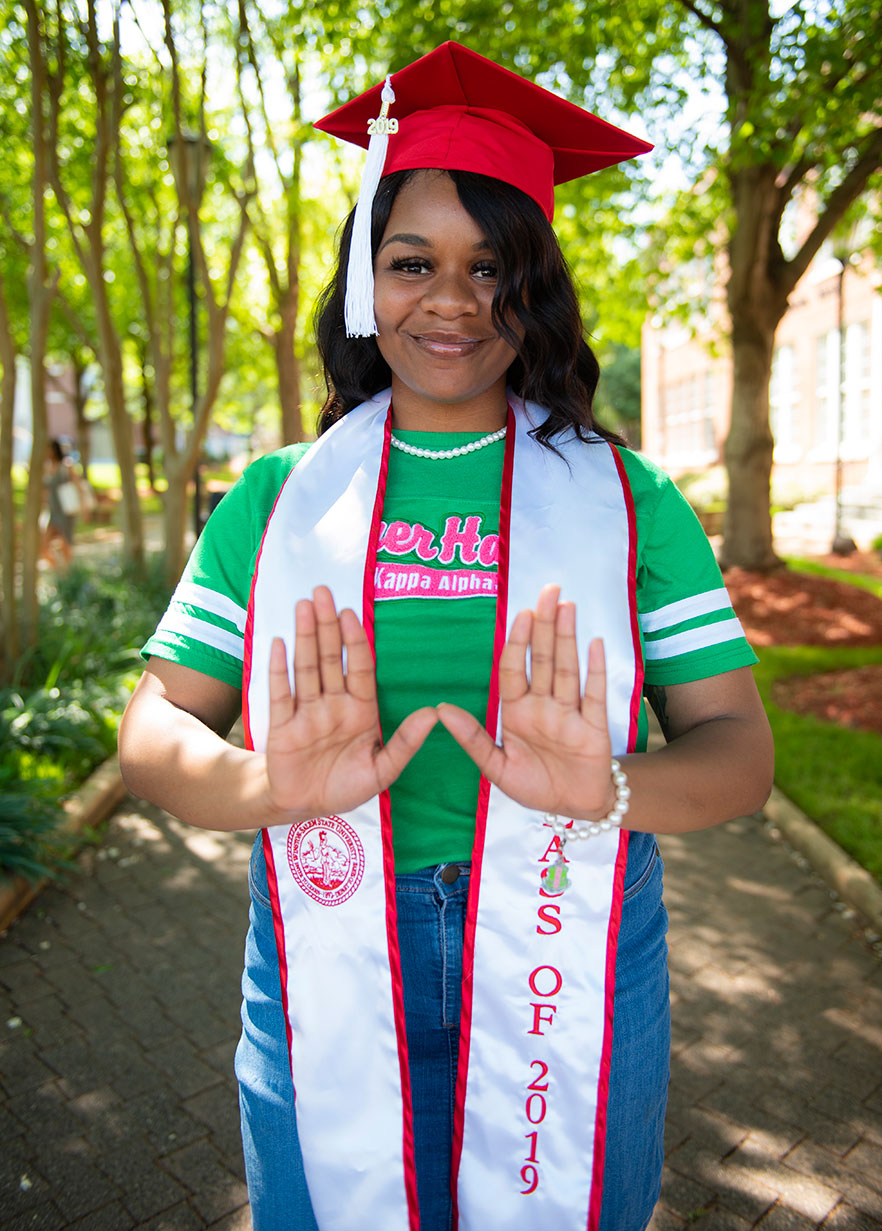 For Cherita Marks, who transferred to WSSU from Wake Technical Community College, being a Ram runs in the family. Marks’ mother, aunt, great-aunt, grandmother, and great-grandmother all are graduates of the university. Her great-aunt is a charter member of the Gamma Lambda Chapter of the Alpha Kappa Alpha, which she also pledged.

How has WSSU helped you reach your ultimate goal?
“WSSU has given me the confidence and resources to reach my goal. I am forever grateful for the staff and faculty that has helped me throughout my time here.”

Next step: She is moving to Los Angeles to work in the public relations department for Freeform Studios (Disney) through the HBCU in LA internship program. She is the first WSSU student selected for the program, which is through the Entertainment Industry College Outreach Program (EICOP). 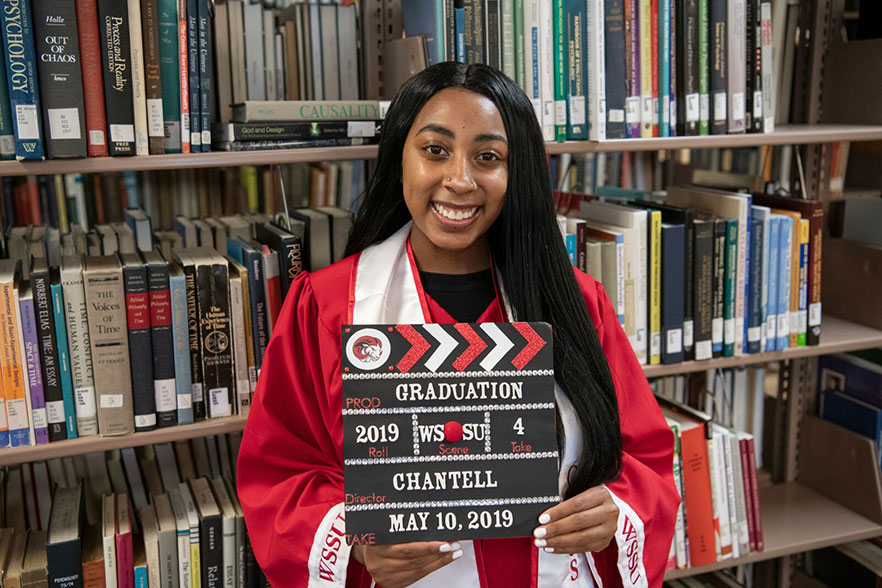 What has your experience been like at WSSU?
“Vlogging has become a way for me to not only make a difference in the lives of others, but it has helped me to grow as a person and an artist. I have become more confident and able to take risks. It will also help me pursue my dream of becoming an actress.”

Next Step: She will be attending Savannah College of Art and Design (SCAD) in the fall to pursue a master’s in performing arts.

Lamar Hardy arrived at WSSU hoping to become the next Stephen A. Smith, but his plan quickly changed as he realized that acting was his passion. Hardy acted in 10 plays during his time at WSSU.

How did WSSU help you reach your ultimate goal?
“Mentors like Dr. Derick Virgil, Dr. William Boone and Mr. Andre Minkins helped me pave my way toward greatness. All three of these men have helped me flourish and have given me the tools and knowledge for myself and the generation after me.”

Next Step: In June, Hardy will portray Walter Lee Younger in "A Raisin in the Sun" at the D.C. Black Theatre Festival. This fall, he will attend the University of Louisville to pursue Master of Fine Arts on a full scholarship. 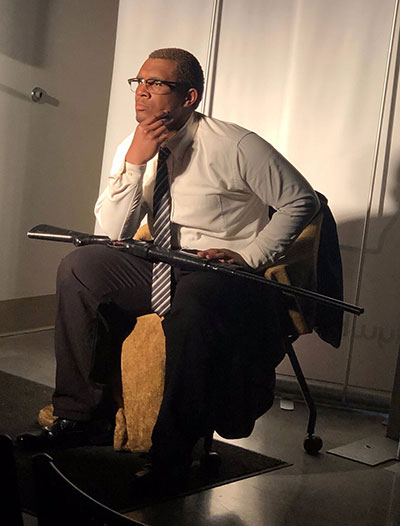 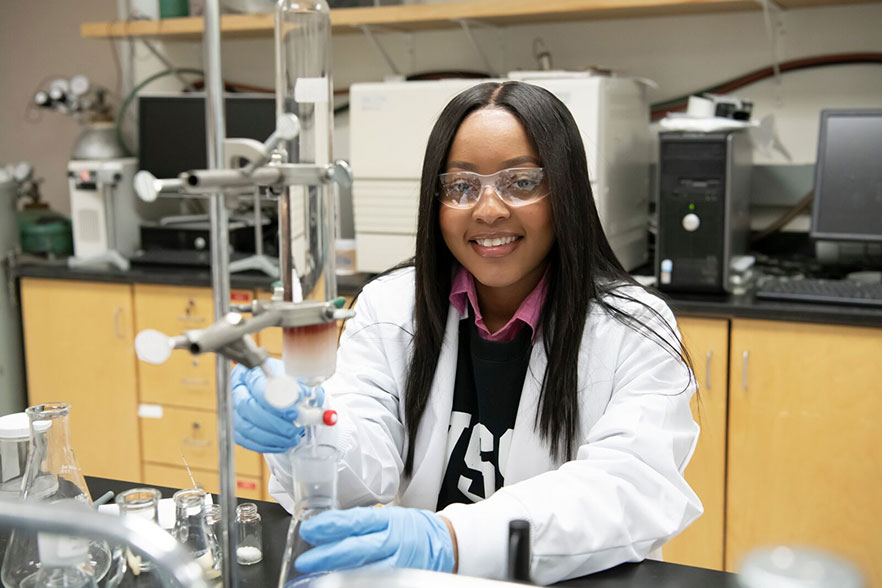 Dynasty Parker was a NIGMS-RISE Scholar during her time at WSSU while also completing extensive hands-on laboratory research. In February, she represented WSSU at the 2019 Emerging Researchers National Conference in STEM in Washington, D.C.

Next Step: Attend the University of Texas-Dallas to pursue a Doctorate in Chemistry.

This is one of a series of articles highlighting WSSU's Class of 2019.