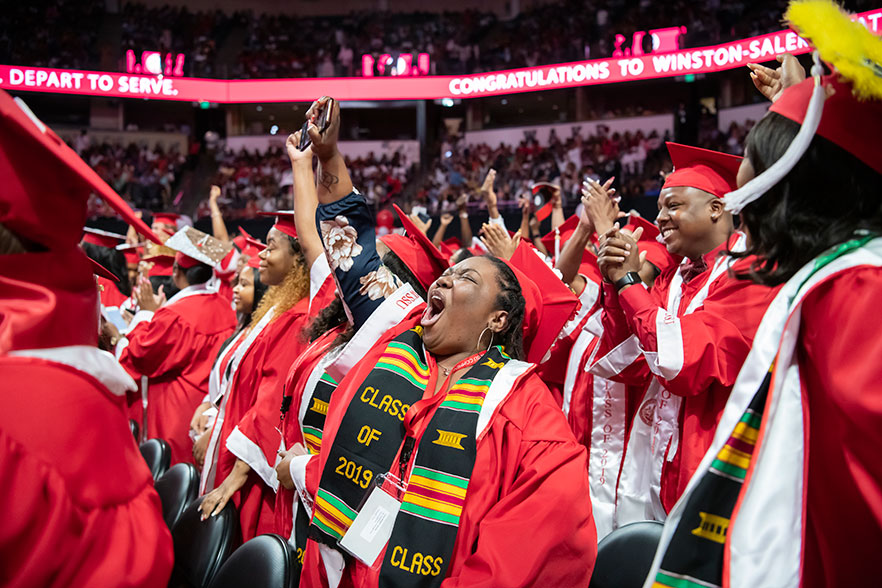 WSSU graduates celebrate during the Commencement Ceremony on May 10. According to Money magazine, WSSU is the top-ranked public HBCU in the nation.

Winston-Salem State University (WSSU) is the no. 1 public HBCU in the nation, according to the magazine’s "Best Colleges for Your Money” 2019-20 rankings, which were released on Monday, Aug. 12.

The rankings identify colleges that have a strong record of helping students graduate and preparing them for jobs at which they’ll earn enough to pay off their debt.

“Money magazine has created one of my favorite rankings because they are recognizing schools for the value they provide students," said WSSU Chancellor Elwood L. Robinson. "We’re proud to rank as the top public HBCU in the nation. This is further indication of the work we’ve done to create a world-class education where students can thrive and succeed. Our graduates are departing prepared to be the next generation of scholars, entrepreneurs and leaders."

WSSU is no. 2 overall among all historically Black colleges and universities for value. This is the third consecutive year WSSU has made Money magazine’s value rankings.

Money magazine examined 26 measures of affordability, educational quality and alumni’s financial success for the rankings. Data was compiled for the ranking from the U.S. Department of Education, Peterson's, PayScale.com and Money/College Measures calculations.

According to Money, the average early-career earnings of WSSU graduates is $46,200 per year, and the average time to a degree is 4.7 years.

This is one of several recent rankings that recognize WSSU’s success elevating the social and economic well-being of its graduates. WSSU ranks no. 7 on CollegeNET’s Social Mobility Index and is one of only five colleges or universities in the country to rank in the top 20 all five years of the rankings.

The city of Winston-Salem is one of only eight cities in the United States to have three or more colleges and universities in Money’s Top 500. The University of North Carolina School of the Arts and Wake Forest University also made the list.

The full rankings are available on Money magazine's website.