For the first time since 2010, college football will return to High Point.

Winston-Salem State University’s (WSSU) Department of Athletics are partnering with the City of High Point, the High Point Convention and Visitors Bureau, the High Point City Council, the Guilford County Board of Commissioners, and Guilford County Schools to create the Furniture City Gridiron Classic. The Rams will take on the Saint Augustine’s Falcons in a CIAA Southern Division matchup on Saturday, Oct. 19, at High Point’s A.J. Simeon Stadium.

The game starts at 6 p.m., but fans are urged come early for the Ram Fan Zone, from 3-5 p.m. at Miracle Field, also part of the High Point Athletic Complex. The free event, hosted by BDaht, will include games, giveaways, food trucks, a DJ and free pictures with Amon the Ram and WSSU student-athletes.

“High Point is excited to be the host city for the Winston-Salem State-Saint Augustine’s game,” said High Point Mayor Jay W. Wagner. “The return of HBCU football to High Point is a great opportunity to showcase our city and to provide positive role models for our city’s children.”

“The county commissioners are happy to help provide this excellent opportunity for High Point youth to attend and experience collegiate football,” said Guilford County Commissioner Carlvena Foster, whose district covers parts of High Point. “This game will not only energize our youth but also inspire them to make college a goal.” 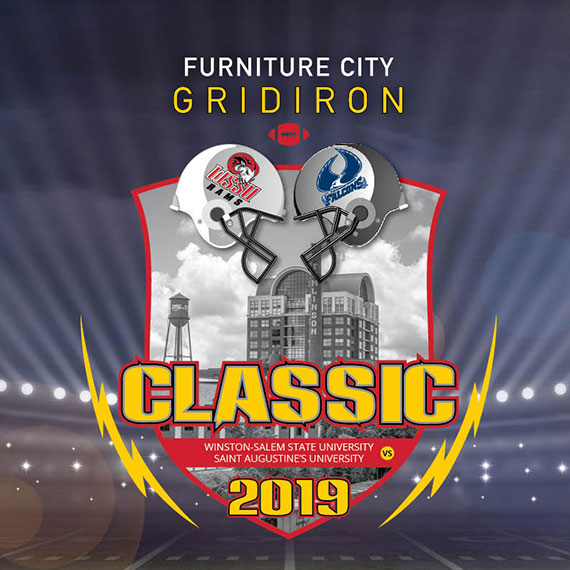 For many youth in High Point, this may be their first opportunity to attend a college football game, Knox said. To encourage attendance, tickets for youth, ages 6-12, are just $5.

Several youth and church organizations in the High Point area are scheduled to attend, including the Carl Chavis YMCA, the High Point Parks and Recreation Department, and the Boys and Girls Clubs of Greater High Point. Youth from the community also will be spotlighted on the field before and during the game.

The Furniture City Gridiron Classic also will be promoted to visitors in town for the High Point Market, which opens on Oct. 19. An estimated 75,000 visitors from around the world will be in High Point for the fall market.

The Red Sea of Sound marching band will perform at halftime. The band opened the season as  ESPN/The Undefeated’s no. 1 ranked HBCU Division II band and recently performed on ESPN’s “First Take.”

Planning for the game began in August after WSSU was offered the game due to a scheduling conflict at St. Aug’s stadium, which is shared with Shaw University.

WSSU last played in High Point in 2010, with more than 8,000 fans there to see the Rams defeat the Virginia Union Panthers.

General tickets for the Furniture City Gridiron Classic are $15; tickets for youth (6-12) are $5; and tickets for visiting college students with valid college ID are $10. Advance tickets are available through WSSU’s ticket office.

On an early spring morning, nine cheerleaders and their coaches, NeSheila Washington and Tevin Allen, arrived at the set in Los Angeles, California.

Sophomore Rajah Caruth will be the first professional driver in a NASCAR series to represent an HBCU. Caruth will be racing at Charlotte Motor Speedway on May 27 as part of the Coca-Cola 600 weekend in Concord, N.C.

Martin said of the most satisfying parts of this process wasn't the fact that she was picked, but that cheerleaders were chosen for the campaign along with other college athletes.