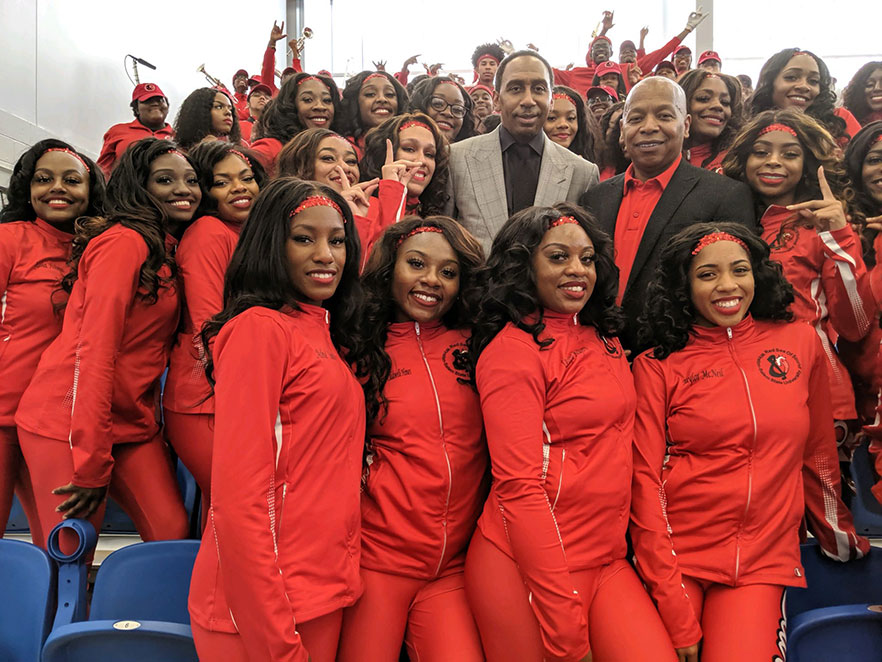 ESPN's Stephen A. Smith and WSSU Chancellor Elwood L. Robinson with the Red Sea of Sound following the taping of ESPN's "First Take," which was broadcast live from HBCU Week in Wilmington, Delaware.

From performances by the Red Sea of Sound (RSOS) to a surprise reunion of former Ram basketball players and a new scholarship, ESPN’s “First Take,” live from Wilmington, Delaware, was a celebration of Winston-Salem State University alumnus Stephen A. Smith ’91 and his HBCU.

Here are five big moments from the show, which was broadcast live from 76ers Fieldhouse on Friday, Sept. 20.

Surrounded by WSSU’s Red Sea of Sound, Smith makes his big entrance on the show. 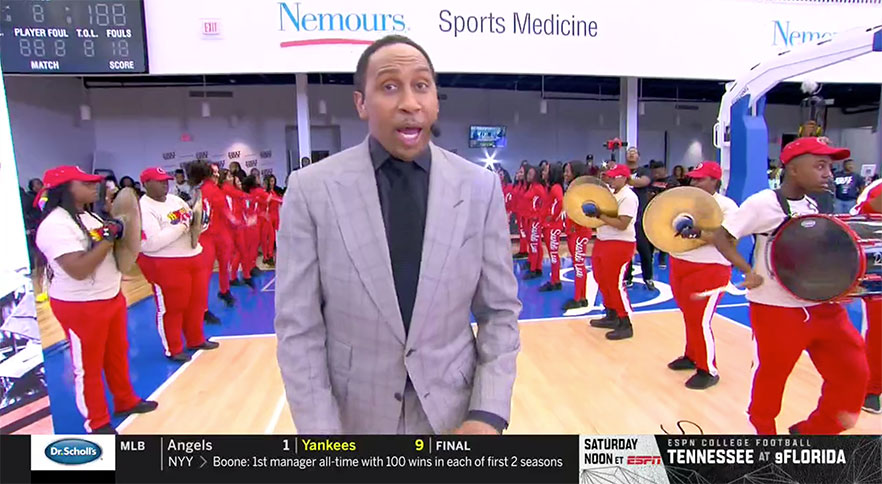 4. The Red Sea of Sound represents

WSSU’s band, the no. 1 Division II HBCU band in the nation according to ESPN’s The Undefeated, boarded three buses from campus on Thursday evening for the all-night trip to Delaware and this big appearance. The band performed five songs during the two-hour show, including the “First Take” theme song they had performed for the Smith in 2017. Other songs were: “Get Up” and “Old Rams Spirit, the WSSU fight song, and "Neck." 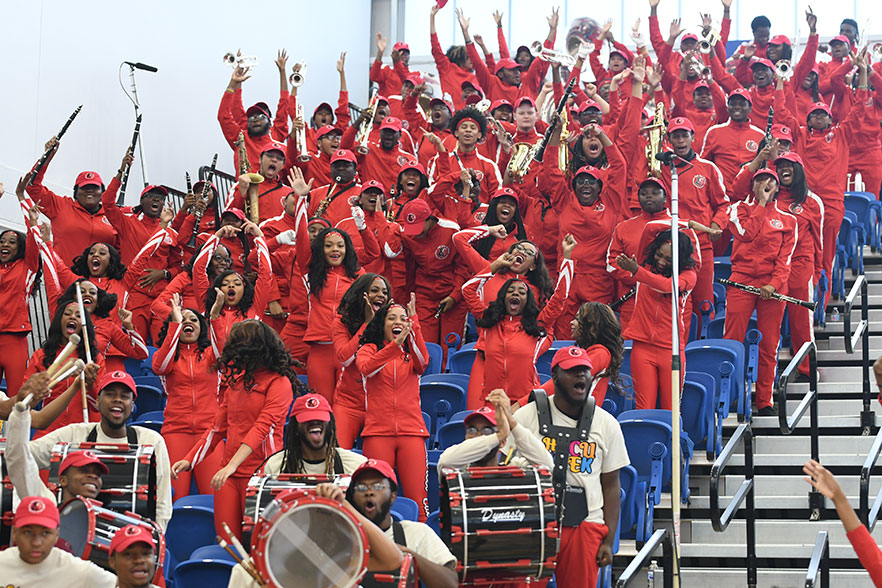 WSSU's Red Sea of Sound were invited by Stephen A. Smith to perform on ESPN's "First Take." (Photo by Mikey Reeves / ESPN Image)

3. A salute for Ram Hall of Famer

During Smith’s “A-List” segment, he counted down the top five all-time HBCU athletes. As he closed out the countdown, Smith moved legendary Ram Earl “The Pearl” Monroe ’68 up the list to no. 1. “What I want to do is take Earl ‘The Pearl’ Monroe and move him to no. 1 because, damn it, he went to Winston-Salem State University.”

In one of the big moments on the show, Ram hoops alumni Phil Hayes, Monte Ross, Gary Stephens Jr., Marc Turner, Terrell Battle, Kevin Edwards surprised Smith with a WSSU jersey and a large photo of him from his basketball days.

“So, you didn’t think to tell me about this?” Smith asked Ross, associate head coach at Temple University. 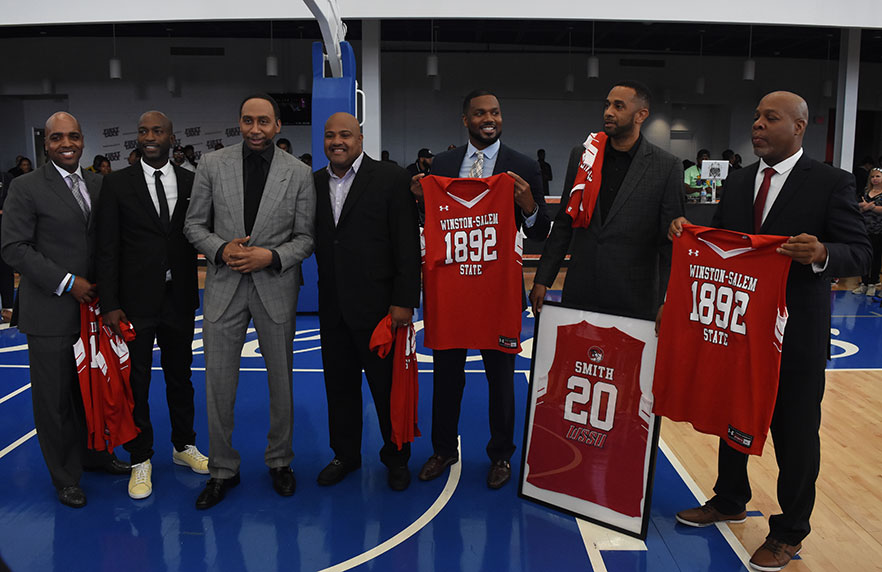 Former WSSU teammates of Stephen A. Smith surprise him during the broadcast of "First Take" on ESPN. (Photo by Mikey Reeves/ESPN Images)

In another big moment on the show, WSSU Chancellor Elwood L. Robinson came out to surprise Smith with the news that WSSU has created the Stephen A. Smith Athletic Scholarship Fund in his honor. The scholarship will create need-based scholarships for WSSU student-athletes.

“We wanted to come out and support you here today,” Robinson said. “We want to say how much we appreciate what you do for HBCUs and we appreciate what you do for Winston-Salem State University. Because of your generosity and your giving, students get a first-class education. Because of you, the Red Sea of Sound is here today. And because of you and your generosity, Money magazine said in 2019 that Winston-Salem State University was the No. 1 public HBCU in the country for best value, and that is because of folks like you. Thank you so much for all that you do.”

Smith responded: “I don’t know what else to say other than thank you. Thank you from the bottom of my heart.”

Friends and alumni can donate to the scholarship online.

Smith – who played for legendary Coach Clarence "Big House" Gaines  – was recognized during the show for his support of HBCUs and as the ambassador for HBCU Week. Other guests included: Magic Johnson and the NFL’s Troy Vincent. 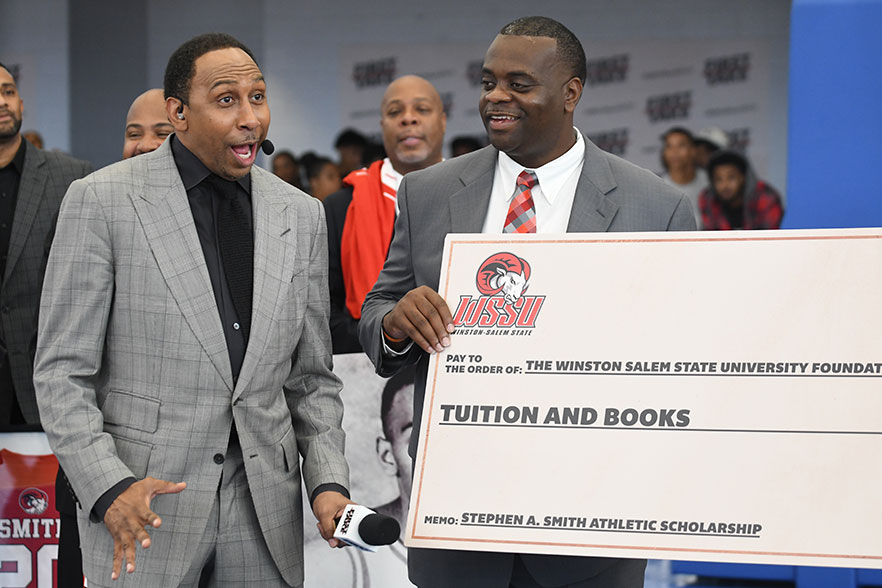