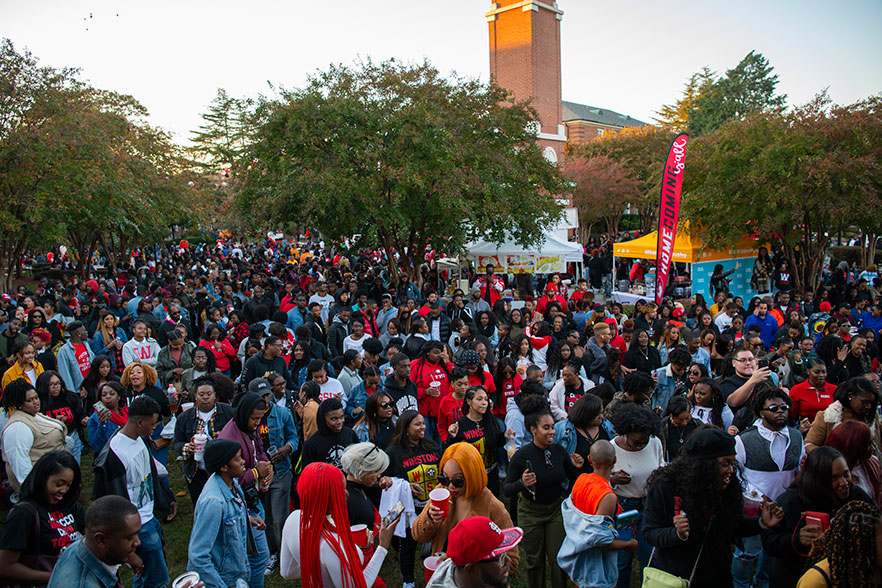 More than 8,000 alumni and fans showed up on campus after the game for Return to the Yard.

Between the parties, the reunions and the game, Forever Red: Homecoming 2019 at Winston-Salem State University had its share of unforgettable moments. As we close the book on this year’s event, WSSU News presents 10 must-see moments.

10. Thousands Return to the Yard

WSSU’s Homecoming loss to Shaw didn’t dampen the Ram spirit on Saturday, as more than 8,000 students, alumni and fans showed up on campus after the game for Return to the Yard. In one Twitter moment, host B-Daht leads a sing-along to Kirk Franklin’s gospel hit “Melodies From Heaven.”

For more than a decade, Carol Brooks has brought her family and friends together for Homecoming tailgate experience. This year was no exception, as she selected a Mardi Gras theme with dining chairs and purple tablecloths. The menu included Creole favorites crawfish, chicken and waffles, gumbo, jambalaya and king cake. 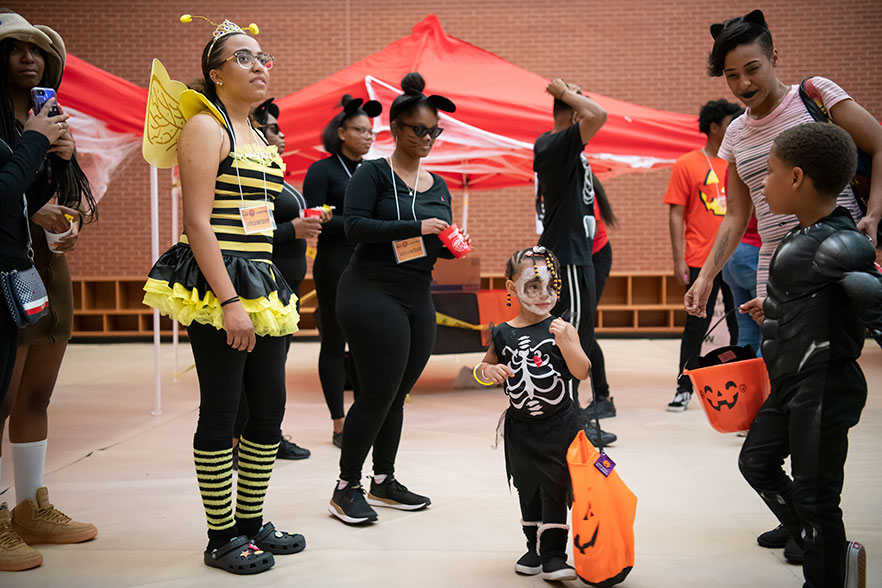 More than 1,000 children and their families attended the Community Ram-O-Lantern on Friday, Oct. 31.

With Homecoming and Halloween falling on the same week, WSSU held a new event this year, the Community Ram-O-Lantern. The free event included candy, games and an appearance by several mascots. The rain couldn’t even dampen the spirit, with more than 1,000 children and families attended the invite inside the Donald J. Reaves Student Activities Center. One surprise at the event was a “Thriller" Halloween flash mob led by students dressed in zombie attire. 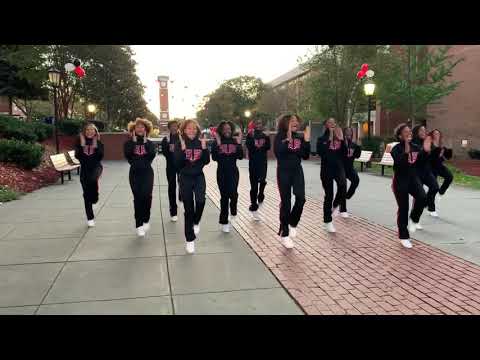 7. Waking up with WSSU’s Powerhouse

With media on campus to preview Homecoming events on Friday, Nov. 1, WSSU’s Powerhouse White Team was there to provide the wake-up call. The cheer, “Get Up,” couldn’t have been more appropriate for 7:30 a.m. 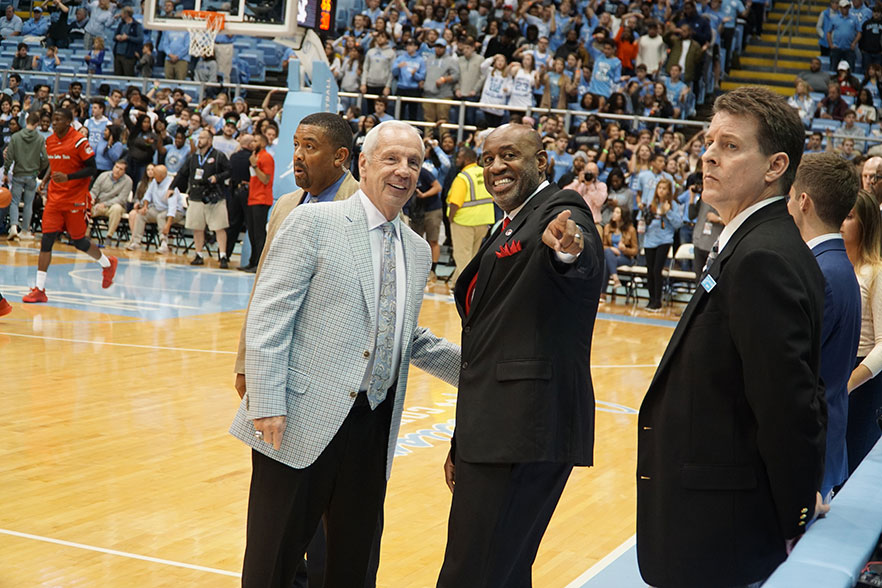 6. Ram Red in a Sea of Carolina Blue

For the first time since 2004, WSSU men’s basketball team faced the UNC Tar Heels. Hundreds of Ram alumni and fans took the Homecoming spirit with them east on Interstate 40 on Friday to watch the exhibition match up at UNC’s Smith Center. For those on campus, the game was on the big screen in the Thompson Center breezeway. 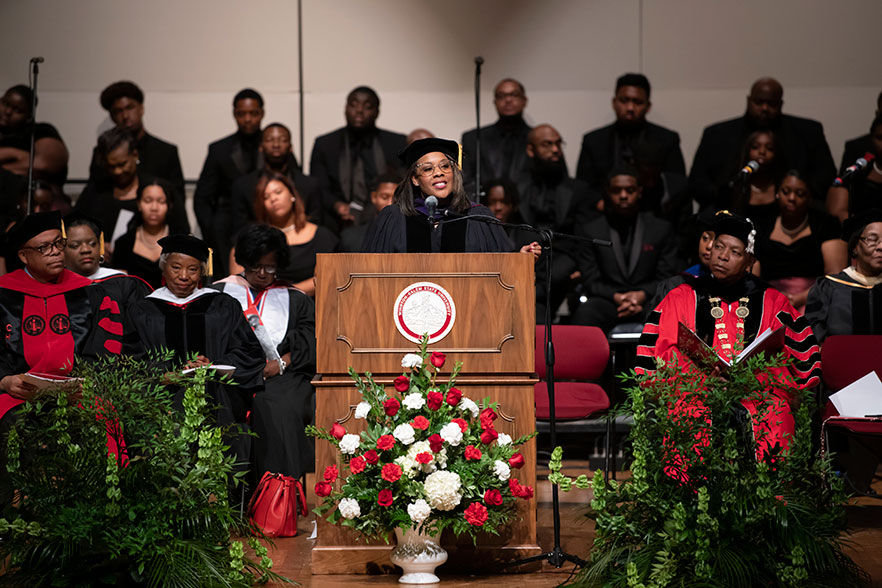 District Judge Tyyawdi “Ty” Baker Hands ’96, spoke about the rich history of WSSU during her keynote address at the Founder’s Day Convocation.

“A man like Dr. Atkins didn’t make the strides he made without failure, denial, resistance, racism, challenges and obstacles,” said Hands, a star of “To Have and to Hold: Charlotte,” a reality show on OWN. “I want to ask that we be encouraged by Dr. Atkins’ vision despite his humble beginnings and those who were determined to cease his progress, he did not let that stop him.” 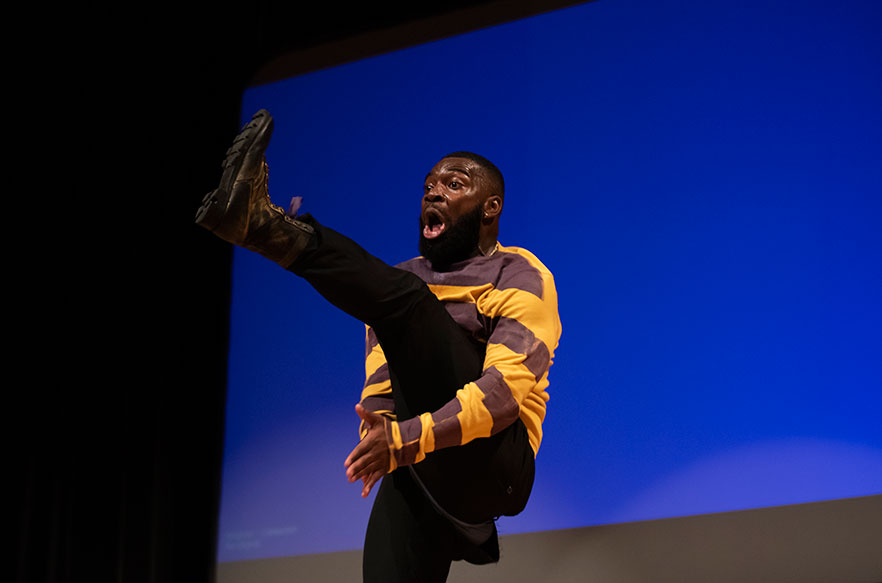 WSSU senior Jaylen Brown on stage during the Homecoming Step Show on Nov. 1.

4. Stepping Up After Car Accident

WSSU senior Jaylen Brown, was injured in December in a head-on collision. For several months, he was in a wheelchair as he got his strength back from a broken hip and pelvis.

On Friday, Nov. 1, he proved that all things are possible as he took the stage with his line brothers from the Mighty Mu Epsilon Chapter of the Omega Psi Phi Fraternity during the Homecoming Step Show. 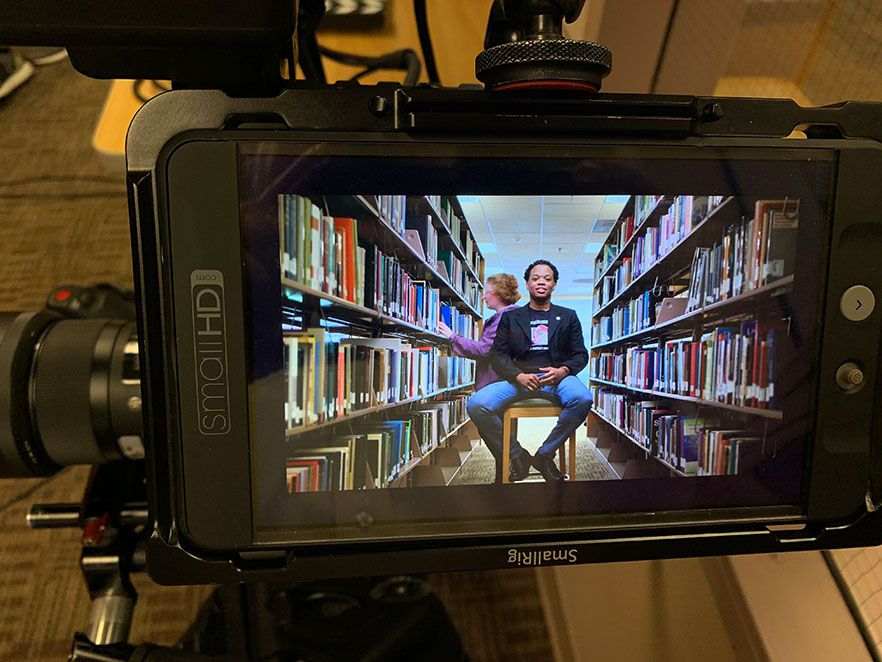 Theo Chunn '09, associate director for student development and engagement, is interviewed by a film crew from BET in the C.G. O'Kelly Library on Thursday, Oct. 31.

WSSU is one of five HBCUs that will be highlighted on "We Own Homecoming," a new BET web series. A film crew of more than a dozen people was on campus Oct. 31 and Nov. 1 capturing the sights and sounds of WSSU’s Homecoming for the series.

The production included interviews with students and staff, and on-location shoots with social media star Jasmine Luv at the Ram Rave and the Homecoming Step Show. WSSU's episode is set to post in early December. 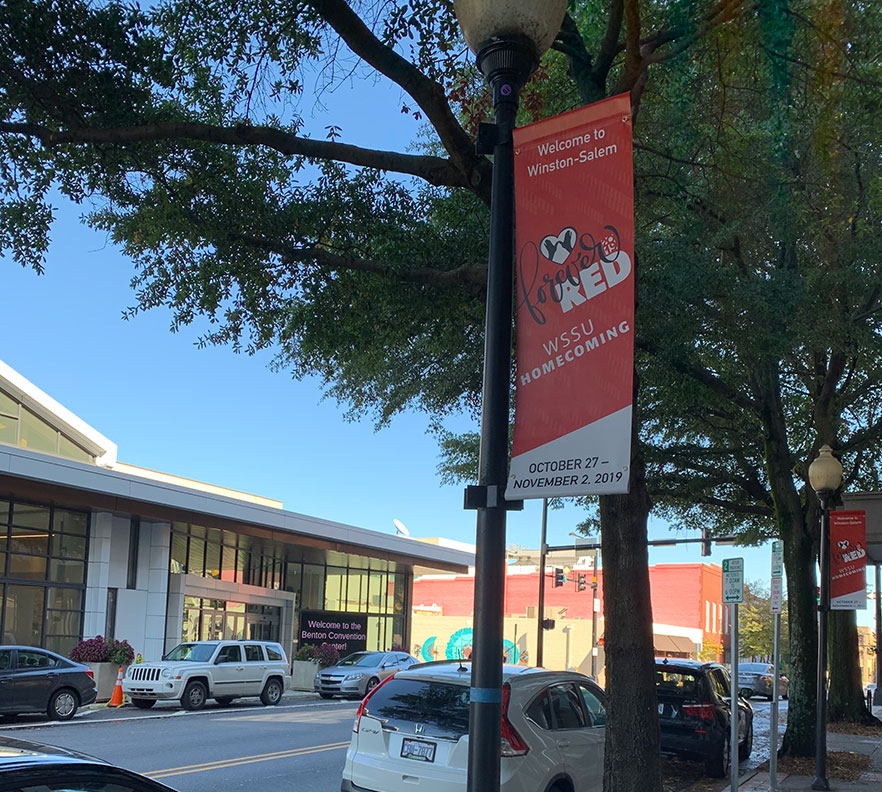 Through a partnership with Visit Winston-Salem, more than a dozen Homecoming welcome banners were placed around the Benton Convention Center.

This year, WSSU partnered with Visit Winston-Salem and businesses in the city to make sure alumni and visitors were recognized as they arrive to town. There were more than a dozen welcome banners placed around the Benton Convention Center and also window clings at merchants and restaurants downtown. Also, the Twin Arches at U.S. 52 and the Kimpton Cardinal were lit in red. 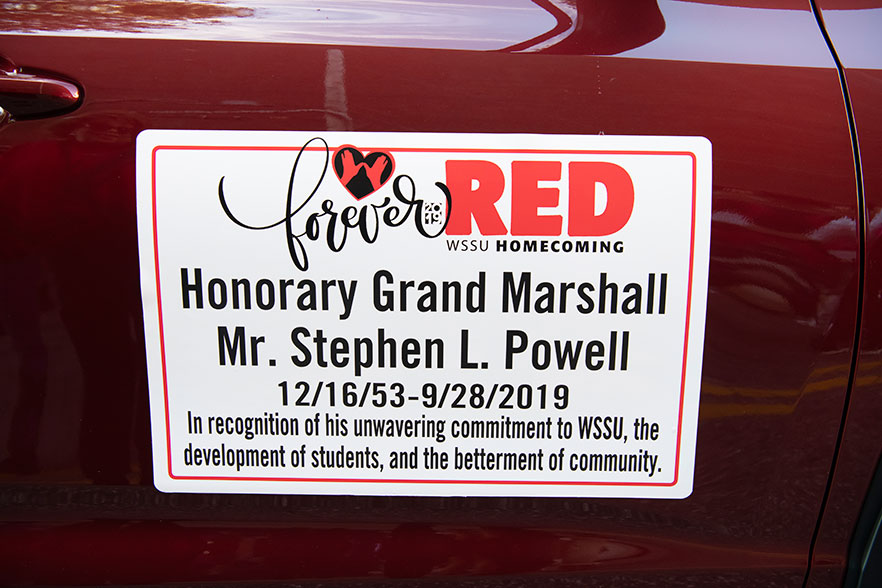 Stephen Powell, who passed away in September, was the honorary grand marshal of the Homecoming Parade.

WSSU alumnus Stephen Powell, who served as WSSU's director of student centers for 10 years, impacted many lives, not just at WSSU but throughout the community. As a tribute to Powell, who passed away on Sept. 28, he was named the honorary grand marshal in the Homecoming Parade. There was an empty passenger's seat in his honor.