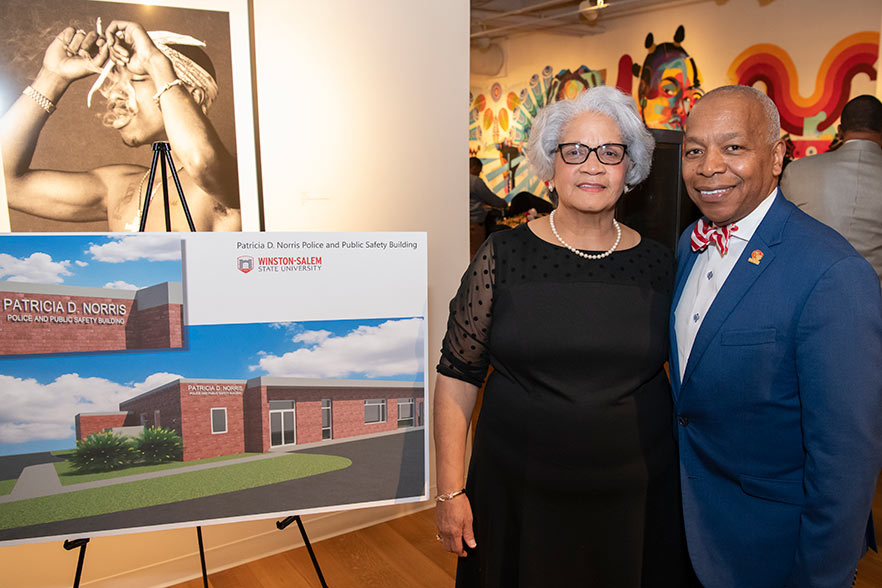 Retiring Winston-Salem State University Chief of Police Patricia Norris received the surprise of a lifetime when she learned that the university will be renaming its Police and Public Safety building in her honor. The announcement came during Chief Norris’s retirement celebration, Dec. 12. Her husband, Robert Norris, made a secret naming donation in honor of his wife to secure a memorable retirement gift.

“It’s not too often that I don’t have something to say,” Chief Norris said as she wiped away tears. “When I got here and started working with the students, it was such a joy. From move-in day to graduation, the whole process is an experience. When you see the green freshmen come to campus and go through graduation and see the transformation that takes place for the students, it is so gratifying. When they leave WSSU, they are ready to take on the world.”

Chief Norris is retiring from WSSU on Dec. 31 after 11 years. She joined the university in 2008 after retiring as the City of Winston-Salem’s chief of police. A lifelong resident of the city, Norris is a 1984 graduate of WSSU. Her retirement follows a 42-year career in law enforcement.

“Over the course of her tenure here, she has really transformed community policing and what it means for a college campus,” said WSSU Chancellor Elwood Robinson. “Under her leadership, she has been able to get students to think about policing in a different way. She has been able to meet students where they are and learn from them. She is someone who cares about the students and has become someone students can come to if they had a problem. That’s the kind of police chief Pat Norris is.”