The historic sit-in, along with other non-violent protests in Winston-Salem, led to a desegregation agreement among local merchants in the city later that spring.

A community commemoration vigil will be held at 3 p.m. on Feb. 23 in downtown Winston-Salem to mark the 60th anniversary of the event. The event is free and open to the public.

The vigil will begin in front of the Millennium Center and process to the corner of Fourth and Liberty Streets, where a historical marker designates the site as the location of the “First sit-in victory in North Carolina.” 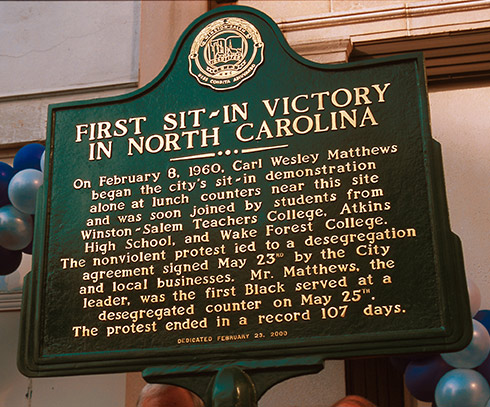 Twenty-one stools will be set up to recognize the students who took part in the sit-in more than half a century ago. The University presidents will read the names.

Leading up to Feb. 23, events on both campuses will provide opportunities for learning and reflection as part of the week-long Legacies of Leadership series commemorating the 60th anniversary of the Winston-Salem sit-ins.  A group of students from WSSU and WFU will travel together to the International Civil Rights Museum in Greensboro. Winston-Salem State will host the annual Heart & Soul Open Mic on WSSU’s campus, featuring Word of Mouth, a community poetry team, and students from WSSU, WFU and Winston-Salem Forsyth County Schools.  The Open Mic event is open only to the WSSU campus community and participating schools.

The documentary “I’m Not my Brother’s Keeper: Leadership and Civil Rights in Winston-Salem,” produced by Wake Forest professors Mary Dalton and Susan Faust, will be shown in Wake Forest University’s Pugh Auditorium at 6:30 p.m. Feb. 19 and the public is invited.