Winston-Salem State University has named Amir Henry to be the next Director of Police and Public Safety, succeeding Chief Patricia Norris, who retired in December 2019. His appointment will be effective on July 1, 2020.

Chief Amir Henry, a native of Bronx, N.Y., has more than 14 years of experience as a law enforcement officer and public servant in the state of North Carolina. He has served in various roles as a law enforcement officer throughout his professional career and has extensive knowledge in command level supervision, risk management, incident command center implementation, security threat groups training, and intelligence documentation.

Chief Henry has served as deputy chief at Winston-Salem State University Police Department since 2017. During his tenure, he led the day-to-day management of the university police department, providing overall direction and coordination of police operations, as well as advisory support to senior university administrators. His responsibilities include supervisory duties, directing operations during critical incidents that require incident command leadership, and operational planning. He was second in command in the absence of the university chief of police.

Prior to that, Chief Henry was patrol captain for the WSSU Police Department and was responsible for supervising uniformed patrol staff and investigations. Previously, he served as a state trooper with the North Carolina Highway Patrol, where he primarily worked with the Criminal Interdiction Unit under Special Operations. Chief Henry also served as a United States Marine stationed in Camp Lejeune, N.C., where he was part of many deployments to several countries, including Afghanistan, which earned him a Combat Action Ribbon.

Chief Henry will oversee all law enforcement services, including 18 full-time, sworn police officers who provide services to the campus and university-owned properties 24-hours a day, seven days a week. 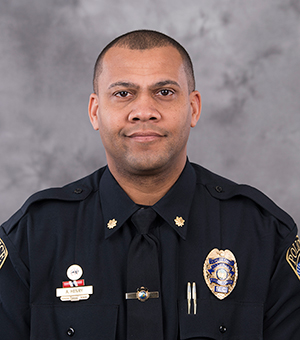