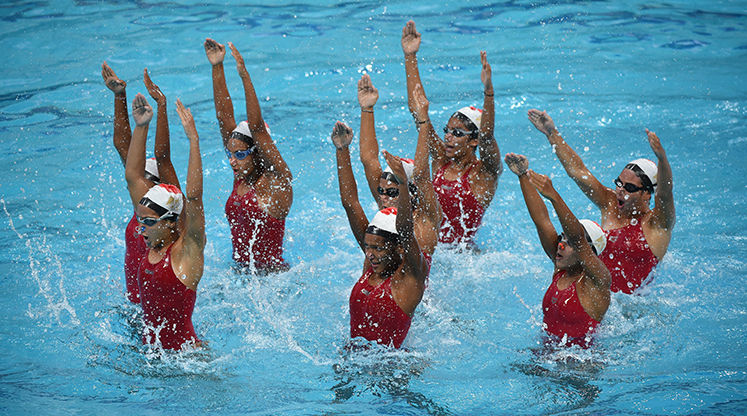 She was looking to expand the offerings of the WSSU swimming program. She wanted to find something different and fun and exciting to today’s students.

She thought back to her childhood and summers at the pool and came up with the answer.

“When I was a young girl going to the pool, they would have a water ballet they would put on at the end of the year. I loved it and I wanted to share that with the students at Winston-Salem State University,” said Garner. “This could be considered a type of athletic event, but it’s also something that’s out of the norm.”

That’s right. Water ballet, also known as synchronized swimming. Its popularity rises every four years in the United States with the Olympics, but then basically disappears from consciousness.

When classes began in February there was a solid turnout for the first time around, about a dozen students with a mixed bag of swimming skills but loaded with excitement. Garner made another step back in time … a really big step back … to make sure that excitement didn’t wane.

“I began just talking to the class about water ballet. Then I showed them The Million Dollar Mermaid with Esther Williams,” said Garner, referring to the 1952 Oscar-nominated film starring Williams, one of the world’s top competitive swimmers of the time. The movie contains many scenes of synchronized swimming.

“The reason I started with that, I wanted everybody to know she is the godmother of synchronized swimming.”

The class was so captivated by the movie, they all purchased black bathing suits similar to the one Williams wore in the production despite Garner’s urging not to.

“I was very surprised at the interest level, the teamwork that came into play, how the leadership worked. It was incredible. It was the best class I had ever taught at Winston-Salem State,” said Garner. “They were so engaged, and they had to bring their creativity with them.”

One of the first things Garner did was convince her class that swimming ability, or lack thereof, would not be a hindrance in the class.

“We watched the middle school girls because we are an HBCU, and I wanted them to see people of color in the water. These young girls were the top of the line and I wanted them to see what you can achieve,” said Garner, who plans on the class being offered at least once a year. She would also like to, at some point, introduce it to Boys and Girls Clubs in the area.

Garner said she pointed out to the class that in The Million Dollar Mermaid many swimmers “have people holding them up. I didn’t want to discourage anyone with ability or lack of ability from taking the class.”

Garner made sure the class remained fun and rewarding from beginning to end. When the group began planning their water ballet production, Garner had each one pick a song they thought would work well with a performance.

“From the beginning, I told them we don’t have to have the music that was with Esther Williams, I said they should pick what you what,” she recalled.

As a group, they went through each song determining which would work best to tell their story and then built out their performance on paper.

“We went through every one of the songs. We talked about the things we could do; I told them the things they could do in the water. We had dancers in the class, beginner swimmers, lifeguards, and cheerleaders. Each one was assigned a part.”

And all of that was before they ever entered the pool the first time.

“This was all prior to getting into the water,” said Garner. “Once we designed that, we got into the water, practiced our skills. Everything was kind of juggled. We tweaked everything they wanted to do.”

This class met just twice a week with only about 40 minutes of pool time for each class. It certainly wasn’t the training schedule of an Olympic athlete, but the results were Olympian in Garner’s opinion.

“It was quite lovely. It was incredible,” Garner said of the finished product. “All of my classes here at WSSU have been good, but the teamwork and camaraderie of this group was above and beyond any classes I’ve ever had.

“It’s like parenting. I taught them the basics and then had to back off. It wasn’t about me telling them what to do; just enhancing some of their creativity.” 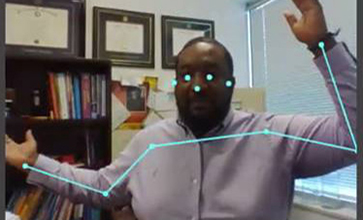