MyWSSU is temporarily down for maintenance. Please use the MyWSSU failover page to access commonly used links.


With star’s encouragement, a WSSU “Ruby in the Rough” makes her dreams come true and pays it forward

Inspiration and encouragement often come from the unlikeliest of places. Take the case of Sharandica Midcalf.

She had chance meeting with entertainer Nick Cannon three years ago. His words of encouragement that day emboldened Midcalf to attack her dream of going to Winston-Salem State University. And in her normal feisty, bubbly manner, and propelled by Cannon’s advice, Shae, as she is called by all who know her, has far exceeded those dreams.

Recently, she was center stage on the Nick Cannon Show with six other Historically Black Colleges and Universities students, all sharing their stories of adversity. And at the end of the show there was a stunning, life-changing moment that will help Midcalf pay her success forward. 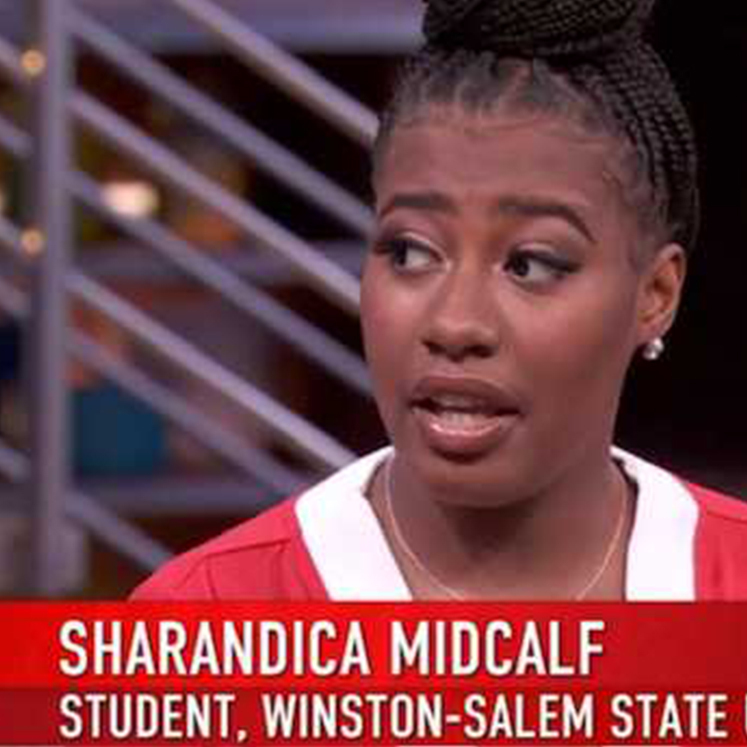 When Midcalf first met Cannon in 2018, she was trying to overcome the stigma and pain of being told by a high school counselor that she “would never go to college, never get into Winston-Salem State.” So, she opted for another college, and was still pondering applying to WSSU when she met Cannon.

“Basically, I walked up to him and introduced myself and said, ‘I’m Shae’ and I told him my story, that I had been told I’d never go to college, never go to WSSU and that I still wanted to transfer to WSSU,” recalled Midcalf, who was a sophomore at Bennett College at the time.

“I asked him ‘how do you go for your dreams’. He said you just have to go for it. Don’t let anybody hold you back, follow your dreams. I decided if Nick Cannon is telling me to go for it, I’m applying to WSSU.”

The meeting ending with an autograph on Midcalf’s phone and a promise to Cannon from her: “Remember, my name is Shae and I’m going to be on your show one day.”

She went back home, filled the application to WSSU, and as the old saying goes: the rest is history.

“I ended up applying and being accepted and have been an outstanding student. I’ve been hiding in plain sight as the Ruby in the Rough as I call myself.”

But the story didn’t end there. Scrolling through her Instagram feed recently, Midcalf discovered Cannon has a new television show that was premiering soon. She thought that show could be a great way to thank Cannon for what he had unknowingly done for her. She immediately fired off a thank you email through the show’s website.

“As I was approaching graduation in December, I had seen on Instagram that Nick was getting a new talk show and I thought how crazy it would be if was on it. So, I sent a little note to his website, it said I wanted to thank him personally for supporting my dreams.”

The next day an email popped into her in box from the Nick Cannon Show. She figured it was just an obligatory response. It was far from that.

“It ended up being from a producer setting up a meeting time. I spoke with her and told her my whole story. She needed pictures and videos. She wanted to know if I had pictures from the first time, I met Nick. Luckily, I had kept all those things and sent them in”

It went quiet for a bit, but about two weeks later she got a text asking if she had been vaccinated and she had been. “That night I prayed, and I told God I wanted to do this, and I told him I needed a sign.” And the sign came.

“She (the producer) called me that night and told me I wasn’t going to call him and thank him, that it’s going to be an HBCU segment, we’re going to get six other HBCU students and you guys are going to be representing your school on TV and talk about your progress.”

Two weeks later Midcalf was on a plane winging it to New York.

“I get to New York, it’s the dream city where I want to sing on Broadway. I was looking and the Statue of Liberty, seeing all the sights. It was so exciting,” Midcalf said about her first New York trip. “I spent that whole first day just travelling around the city. I went to the 9-11 Museum, Times Square, Broadway, trying to go to every inch of everything that day. I didn’t stop. I wanted to hold onto the day.”

The next morning it was showtime. She met the other HBCU students who were going to be on the show, and they all prayed together. “I prayed a lot through this,” Midcalf said.

Then there was hair and makeup and instructions. And then it was showtime.

“I walked out and introduced myself to Nick and told him who I was, and he said, ‘I remember you’. I was trying to be all poised, but I really wanted to jump out of my skin,” said Midcalf.

Unbeknownst to the students, Zoom interviews done weeks before were used on the show, each explaining their adversity and how they had worked through it.

“Nick quoted me from that video we didn’t know existed as I explained my life and how I wanted to be an inspiration,” said Midcalf. “He told me he was proud of everything I had done.”

Then, abruptly, all the students were asked to leave the stage, a curious move they all thought. Then they were all called back several minutes later. That’s when the big news was announced: Cannon had arranged for all of the students’ college debt to be paid off.

“I remember standing in the middle of the stage and wanting to hug everyone. I could see confetti flying. I was like ‘oh my goodness,’ and screaming and crying. I was an emotional wreck.”

“I started crying in the car on the way to the airport when I realized my debt was going to be paid off and my aunt and uncle weren’t going to have to pay anything,” said Midcalf, who was raised by her aunt and uncle Dwayne and Latoya Lester from the age of 15 after being neglected and homeless in 2014.

Graduation in December was not the end of this story. Midcalf is returning to WSSU to pursue a Masters in rehabilitative counselling and deaf studies.

She plans to start an initiative called “Ruby in the Rough” with her going into schools to speak to children and help out those who have low GPAs. “Some kids just need a push,” she said.

That work has already begun. Just a couple of days after her appearance on the Nick Cannon Show, she spoke to her old high school teacher’s junior class. “She was one of the people who believed in me and wrote recommendations. I cried in her classroom on college application day because I had been told I was not going to be able to get in. It was a full-circle moment for me.”

She will never underestimate the impact Winston-Salem State University has had in building this success story.

“I have had faculty and staff along with my aunt to help me get into womanhood,” said Midcalf. “They have molded me.

“At the end of the day, we’re all turning in assignments at 11:59 p.m., we’re all trying to make a career. There have been nights I’ve made friends while crying in the library, friends that will be friends for life. This is home.”