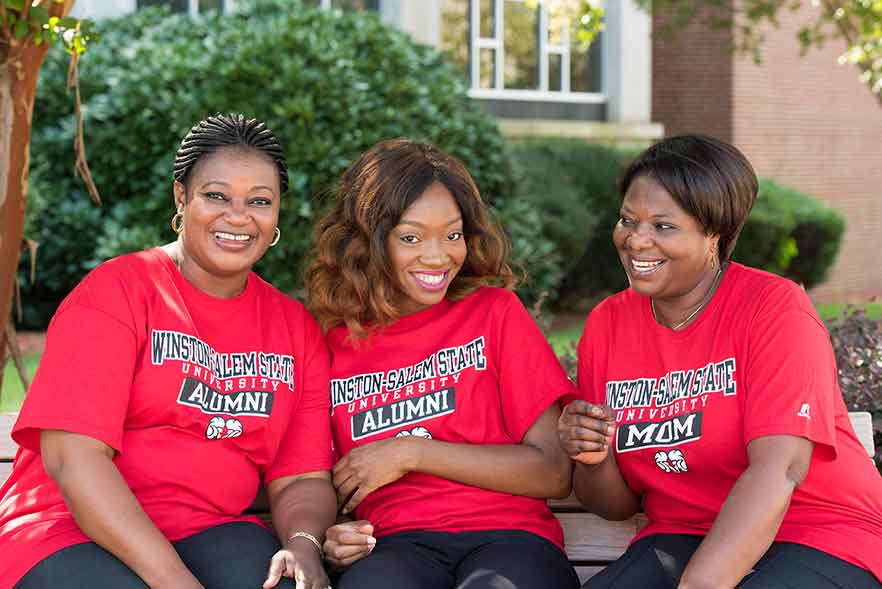 Eomba F. and Edith Pungu are sisters by birth and also sisters in nursing.

The sisters, originally from the Democratic Republic of Congo, will cross the Winston-Salem State University commencement stage together for the second time in 10 years on Friday, May 19, earning their Master of Science in Nursing (MSN) degree.

“I’m so excited. I feel honored and privileged to once again walk to the podium with my lovely sister,” Edith Pungu says. “I could not have imagined being here without the love and support of my big sister. She has encouraged me when I felt defeated and helped me to persevere when the journey seemed unbearable.”

Eomba Pungu says: “My younger sister has been my cheerleader and backbone throughout this entire process.”

And the Ram connection continues with the next generation.

Eomba Pungu’s daughter, Amnazo Muhirwa, is also following in her mother and aunt’s footsteps. She earned her bachelor’s in nursing from WSSU, and also is enrolled in the MSN program . Next year, Muhirwa plans to take her degree one step further, pursuing her doctorate in nursing at Duke University through the Pathways to Ph.D. program, a partnership between WSSU’s School of Health Sciences and Duke University’s Division of Nursing.

The sisters, who both work as nurses in Charlotte, say they are excited about taking their career to another level, as family nurse practitioners (FNP).

“I can better serve my community with this degree,” Edith Pungu says. “In my eyes, the opportunities are endless. Nurse practitioners serve a unique role for the healthcare community, I am so grateful for the knowledge gained during my time at WSSU –  both for my BSN and now MSN-FNP. I cannot forget to express my gratitude to all the faculty and staff for all the knowledge, encouragement and time they have invested to make this accomplishment possible.”

Eomba Pungu plans to open a practice to serve low-income communities to increase access to care and provide health education.

“As an advanced family nurse practitioner, I am privileged to now serve on the frontline of healthcare,” she says. “There is a clear need in our community for an increase in healthcare access. I have witnessed the unavailability of adequate medical treatment in communities as well as preventable illnesses and disease prevail in lower socioeconomic groups.”

From Congo to WSSU

Eomba Pungu emigrated from the Democratic Republic of Congo, one of the poorest countries in Africa, in 1992. Her sister joined her three years later.

“Life was difficult for most families in Congo. To put bread on the table for kids was very stressful for most parents,” she says. “You might be surprised to hear this, there are no middle-class families, you are either very rich or very poor.”

Edith Pungu says she has dreamed of becoming a nurse since she was young.

“I recall seeing nuns back home helping people, and I would tell my parents, ‘When I grow up, I will be like them. I would like to work in a hospital and help the sick’,” Edith Pungu said. “I believe nursing runs in my family and truly is my passion.”

After two WSSU degrees Eomba Pungu says she may be ready to put away the textbooks.

“I have learned to never say never,” she says. “As of now I would like to take some time to relax and regroup. I do not know what the future holds in regards to returning to school, but WSSU will always be my school. I am a proud Ram.”