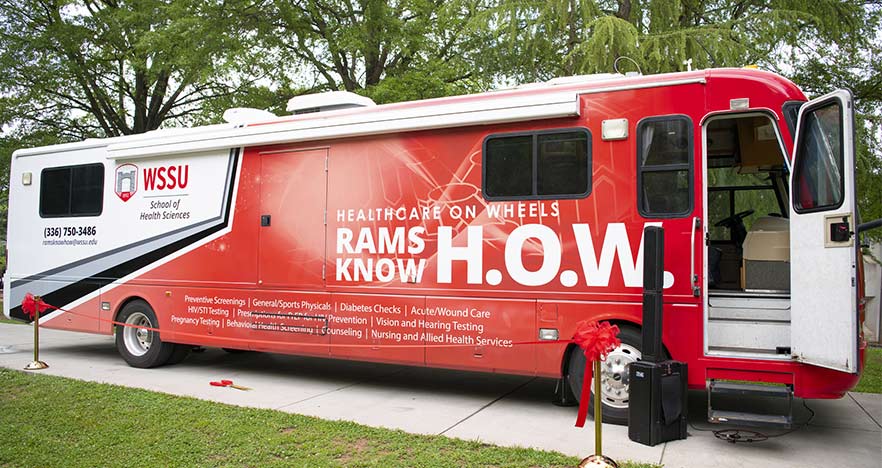 WSSU cuts ribbon for the second university-branded mobile clinic on Thursday, May 17.

A second mobile health clinic is about to hit the road, serving the uninsured and underinsured of in East Winston.

The Rams Know H.O.W. Mobile Clinic, a service of SOHS’ Center of Excellence for the Elimination of Health Disparities (CEEHD), is the only HBCU-based mobile clinic in the nation. Earlier this year, thanks to $170,294 grant from Kate B. Reynolds Charitable Trust, the Rams Know H.O.W. Mobile Clinic began expanded services at locations in East Winston.

“This unit will increase the capacity of our students, faculty and staff in addressing the needs of more local residents,” said Peggy Valentine, dean of the School of Health Sciences at WSSU. “We expect to surpass our current record of reaching 1,000 local residence each year by adding this unit.”

Since its launched in 2011, the WSSU mobile clinic has served nearly 10,000 uninsured or underinsured residents. Services are provided by faculty, staff and students from WSSU’s School of Health Sciences. CEEHD partners with United Health Centers and Southside Discount Pharmacy on services.

The ribbon cutting, which immediately followed the SOHS Spring Pinning Ceremony, was attended by WSSU administrators, trustees, faculty and staff, as well as officials from the Kate B. Reynolds Charitable Trust, United Health Centers, Novant Health and Southside Discount Pharmacy.

WSSU’s School of Health Sciences is an ethnically diverse school that embraces health equity in education, research and service. Signature programs include master of science in occupational therapy, clinical doctoral degrees in nursing and physical therapy, and a bridge to the Ph.D. in nursing with Duke University.

URL: Center of Excellence for the Elimination of Health Disparities
Media Contact