Rendering from WSSU's new master plan envisions a new gateway to the university at Martin Luther King Jr. Drive. To the left is a renovated and expanded Hall Patterson Building. (Sasaki Associates, with Design Distill)

Architects have unveiled a long-term vision for Winston-Salem State University’s campus that supports growth and offers enhanced amenities for students.

“The master plan for Winston-Salem State University’s 117-acre campus will provide a roadmap for strategic long-term growth over the next 20 years,” said Constance Mallette, vice chancellor of finance and administration for WSSU. “Guided by the 2016-21 Strategic Plan, this document supports the growth of academic programs and advances the living/learning concept, which focuses on creating facilities that support high-impact teaching practices and enhanced student learning.”

The master plan, which was introduced at the WSSU Board of Trustees meeting on June 8, proposes 1.35-million square feet of new construction, including:

Over the nine-month “visioning process,” which began in June 2017, staff from the global design firm Sasaki Associates met with WSSU administrators, faculty, staff and students to identify opportunities for improvements, she said. They also analyzed overall growth.

Mallette said out of those meetings, five main ideas were incorporated as part of the vision:

The plan, which was unanimously approved by the Board of Trustees, was presented by Greg Haven, planner and architect for Sasaki.

WSSU currently has about 5,100 students and nearly 1,000 full- and part-time employees. The master plan, which cost $450,000, prepares WSSU for 12 percent growth over the next five years. That equals about 650 additional students –  441 undergraduate and 208 graduate students.

The master plan projects future construction totaling $556 million in current dollars. Nothing outlined in the plan currently has funding associated.

A committee of 32 faculty, staff, administrators and students advised on the plan. Sasaki Associates also completed the 2011 master plan.

WSSU updates its master plan at least every 10 years.

Since the last master plan seven years ago, WSSU has added nearly 270,000 square feet of new and renovated spaces. Nearly $100 million in construction is underway or planned on campus, including H. Douglas Covington Hall, a new living/learning residence hall that will open in August, and a sciences building. Local and regional projects like the U.S. 52/Research Parkway interchange also occurred since 2011.

Check out these frequently asked questions about the new master plan for WSSU. 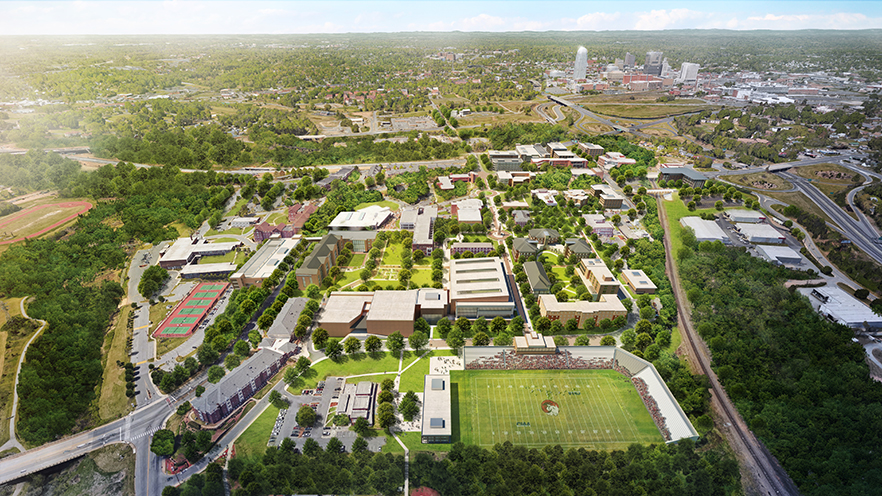