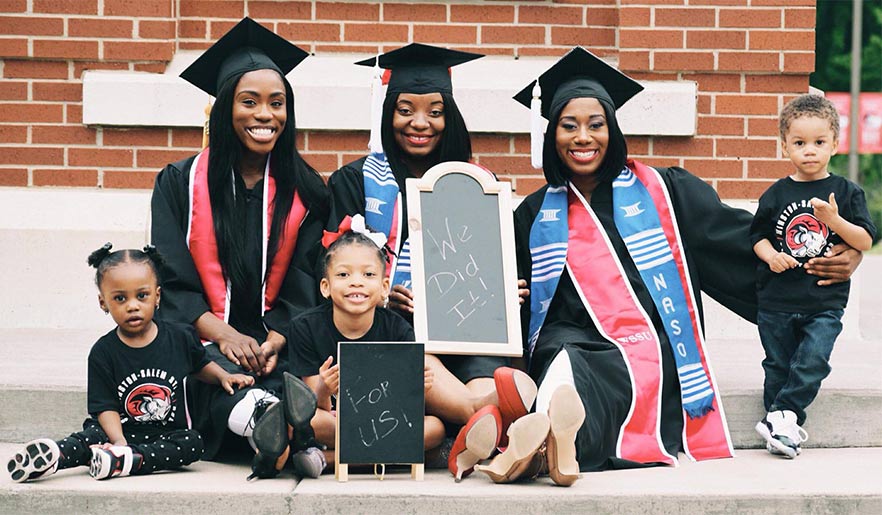 From left: Tianca White, Michele’Le Bailey and Christen-Aubrey Turner, pictured with their children, earned their bachelor’s degrees from WSSU on May 18.

Three single mothers have overcome the odds, earning their bachelor’s degrees, together.

Tianca White, Michele’Le Bailey and Christen-Aubrey Turner, all of Salisbury, earned their bachelor’s degrees from Winston-Salem State University (WSSU) on May 18. Each attended WSSU full time while pursuing their degrees.

“It was hectic because we didn't have child care at the time, and we were on a mission to arrive early to get back to Salisbury and relieve our babysitters,” says Turner, a mother of 2-year-old Trenton Gaymon. She first enrolled at WSSU in 2008 and was readmitted in August 2016.  “We are thankful for our parents and grandparents, they were a big help with assisting us with our children throughout the entire journey. We are just so excited about our futures. Having children didn't stop us from accomplishing our goals, it motivated us to become even greater. Thanks to WSSU, we were able to successfully achieve such a milestone.”

White, who earned her bachelor’s degree in social work, and Turner are cousins. All three have known each other since high school.

Bailey, who earned her bachelor’s degree in interdisciplinary studies is the mother of 6-year-old A'Livia Gaymon. She's also expecting her second child in August.

"The amount of support that I received from my Ram Fam was outstanding," Bailey says. "WSSU helped motivate both myself and my child. I must say it is a school that is very child-friendly. My daughter is now 6 years old but is no stranger to the campus of WSSU. I remember having to get her and myself ready, drive form Salisbury just to make it to school on time after baby sitting plans failed. Not once did my professors complain about her being there. To see the thrill on my daughter's face every time she stepped foot on campus was such a joyful experience. At an early age, I was already planting seeds, and instilling in her the value of being an educated Black woman."

White, the mother of 2-year-old Chyna, also pleased with her experience at WSSU.

“WSSU has allowed me to believe in my goals and achieve each one of them regardless of any obstacles I've faced,” says White. “I've obtained time management, professionalism and integrity. Matriculating through the social work program has also taught me the importance of human relationships. I can proudly say that I am now a skilled generalist practitioner, and I am well equipped to perform in my future endeavors thanks to WSSU and the social work program.”

Turner adds: “Going back to finish what I started wasn’t easy, but WSSU made it possible for me to quickly adapt and feel a part of the student body. Being a readmitted student, I found my purpose and how I could positively impact other students with similar backgrounds through the Nontraditional Adult Student Organization (NASO). I took advantage of the resources on campus, completed a summer internship, and was determined to excel. After completing my first semester and making the Dean’s list, I was so thrilled and even more motivated to finish my undergraduate studies.”

Next, Turner aspires to become a nurse through WSSU’s accelerated BSN program.

“Thanks to WSSU, my mother and family, I was able to overcome the challenges as a full-time student –  commuting from Salisbury each day,” Turner says. “I can proudly say I made it! I can now provide an even better life for my son Trenton and myself.”

A study from the Institute for Women’s Policy Research found that single mothers who earn a degree gross nearly $300,000 more over their lifetime than those who just earned a high school diploma. 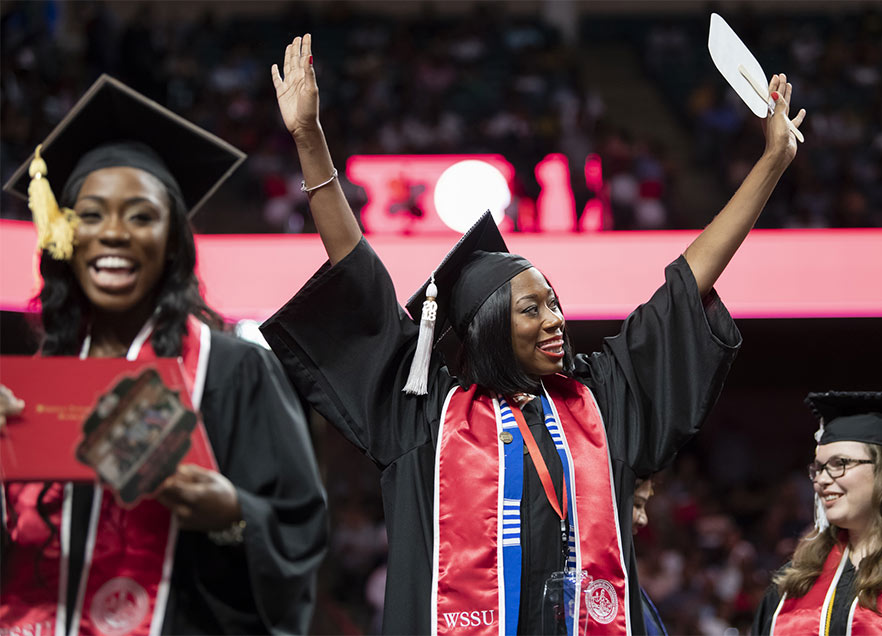 Christen-Aubrey Turner celebrates her accomplishment as she walks across stage during WSSU's commencement ceremony on May 18.
Tags: Features, Graduation, Media, Campus Life, Alumni, The College