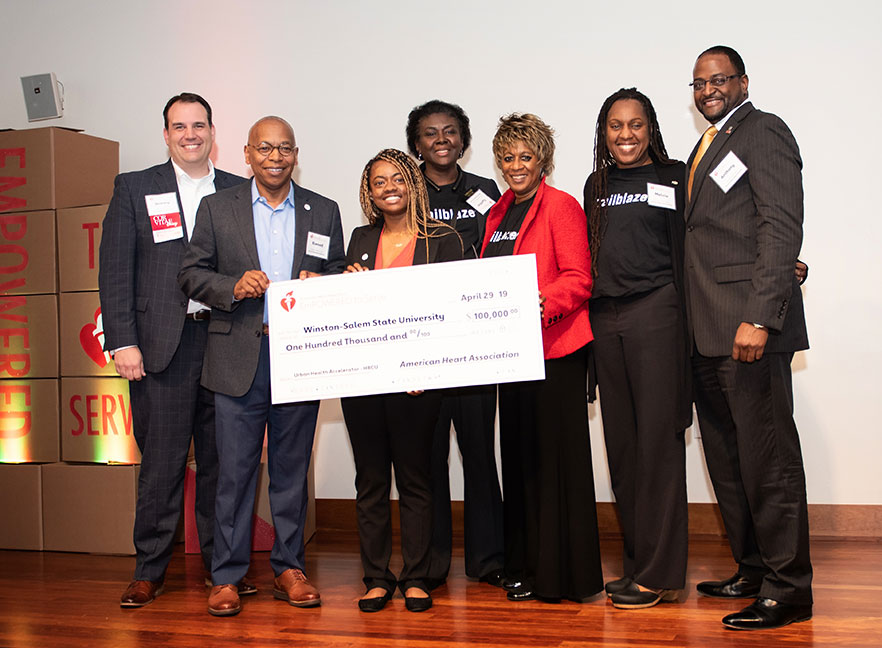 The two-year grant is through the American Heart Association’s first EmPOWERED to Serve Urban Health Accelerator – HBCU Healthy Community Challenge Showcase. WSSU was selected by a panel of judges at a showcase at the International Civil Rights Museum in Greensboro on Monday, April 29.

Through the grant, WSSU will partner with two existing community initiatives to mobilize and connect campus and community resources to address food insecurity in Winston-Salem.

“This American Heart Association EmPOWERED grant is a way for us to make a difference in our community immediately,” said Dr. Melicia Whitt-Glover, executive director of WSSU’s Center of Excellence for the Elimination of Healthcare Disparities (CEEHD), one of two faculty leads on the proposal.

WSSU’s proposal was one of two selected for the grant from 19 HBCU proposals.

“We’re very proud that our project was selected,” said Dr. Cynthia Williams-Brown, chair and associate professor of the Department of Health, Physical Education and Sport Studies (HPSS), also a faculty lead on the project. “This student-led project ties into existing initiatives and speaks to our role in the community.”

Redfearn, who presented WSSU’s proposal during the showcase, said Winston-Salem has about 21 food deserts, areas that are void of healthy food options. The issue predominately impacts residents in the minority communities around the university, she said.

The showcase was broadcast live through #RolandMartinUnfiltered. Martin, award-winning journalist and writer, was the master of ceremonies for the event.

The funding for the American Heart Association’s EmPOWERED to Serve Urban Health Accelerator – HBCU Community Wellness Challenge was made possible by the Barbara Houston Historically Black Colleges and Universities Legacy Award and through the support of John Houston III.

“Every member of our community should be able to achieve well-being supported by the places they live, learn, work, pray, and heal,” said Jeremy Beauchamp, Executive Vice President, American Heart Association, Mid-Atlantic Affiliate. “We are excited to work alongside HBCUs to increase the opportunity for all of our neighbors to live longer, healthier lives.”

The EmPOWERED to Serve Urban Health Accelerator HBCU Leadership Summit was developed to address critical needs and social issues – in and around campuses – that impact the ability of individuals to attain optimal health. Earlier this year, the American Heart Association called on HBCUs from Maryland, DC, Virginia, North Carolina and South Carolina to help solve some of today’s most complex problems including removing social and societal barriers to health.

WSSU was one of five HBCUs finalists to present at the showcase. Charlotte’s Johnson C. Smith University was the other winner.