When Robinson, a 19-year-old sophomore at Winston-Salem State University, was 11 years old he convinced his two best friends to make a short film with him, a 30-minute, amateur movie about three brothers who were also part-time superheroes called “Super Bros.”

Fast forward a few years and Robinson is standing on a soundstage in Hollywood, soaking in the experience of being in front of the camera for the shooting of another video, a national commercial for McDonalds.

“Shooting the commercial put me in the mind of being 11 again. Filming, writing scripts and directing my friends for seven months felt like a real production back then, but this here was the real deal,” said Robinson. 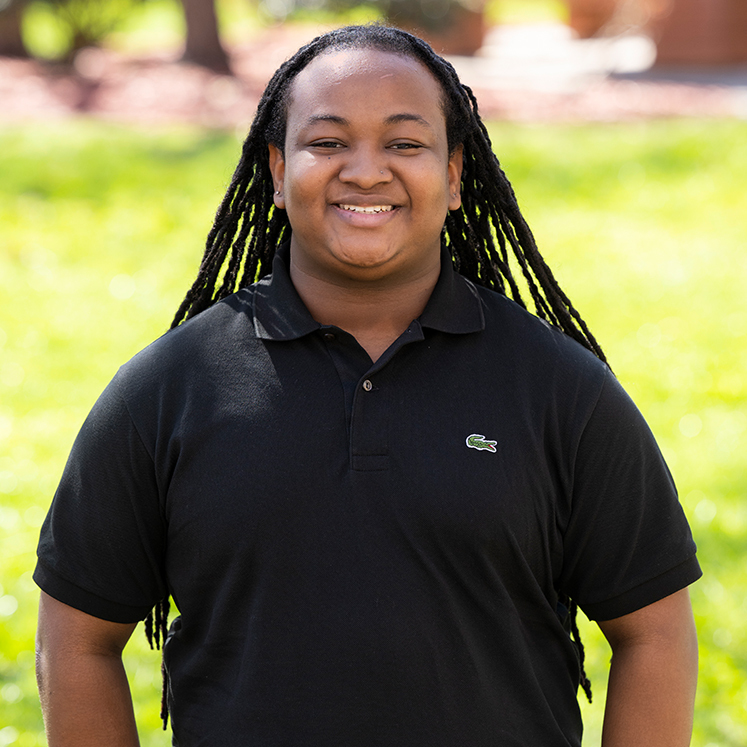 It was that short, childhood film, though, that was the impetus for not only the McDonald’s video, but his college journey to WSSU, his plans for a behind-the-camera career in videography or television and his desire to help other young students begin their own journeys.

“Over the years I’ve been able to see the errors and overall mess of a film that ‘Super Bros’ was, but I treasure it, nonetheless. It’s my foundation. It’s a time capsule of my favorite summer and the infant stages of a long-standing passion,” said Robinson, a Richmond, Virginia native.

After making that video and posting in on YouTube, Robinson knew he wanted a career in video. Not long after that he discovered Historically Black College and Universities and quickly understood one of those storied schools would be in his future.

“By the time I was in the ninth grade, I knew I wanted to go to an HBCU,” recalled Robinson. “There are so many great HBCU options in North Carolina. When we visited Winston-Salem State, I really appreciated that it was a smaller university and their family-like environment.”

It didn’t hurt, either, that WSSU has a strong mass communications program with an impressive television and film production curriculum. Those things rolled together made it a fairly easy decision for Robinson when it came time to select a college.

Robinson is involved in RAMS-TV, a student media group which offers WSSU students information, news, educational, and entertainment programming. It is his initial big step outside of the classroom to get first-hand experience in the behind-the-scenes aspect of television.

“RAMS-TV is a great organization. We specialize in interviews and creating content that specializes in showcasing student athletes, Greek organizations, everyday students, essentially anything that’s happening on campus will be covered by us,” said Robinson. “I’m always willing to learn a new skill, whatever I’m asked to do, I’ll try. I appreciate how it takes you out of your comfort zone.”

Robinson’s Hollywood trip and further exposure to creating television content was serendipitous, the product of being in the right place at the right time melding with his near legendary work to find scholarships and other funding for his college education.

Researching possible scholarships, Robinson was on the Thurgood Marshall College Fund website when he ran across the McDonald’s Black and Positively Golden Scholarship, a $15,000 grant that would be awarded to 35 HCBU students across the nation.

“I did the application, wrote an essay, and put together a short video, and thank God, a few of months later I found out I got it. It was $15,000, enough to fund an entire school semester,” said Robinson, who has created a digital business, ERScholars LLC. to assist other minority students in their search for scholarship opportunities.

But after receiving the scholarship, Robinson was in for a shock. There was going to be more than a monetary boost to his college career.

“The financial award was a blessing and greatly appreciated, but I couldn’t have expected the opportunity that came with it,” said Robinson.

Robinson was one of seven of the 35 scholarship winners selected to be part of a McDonald’s television commercial to run during February, coinciding with Black History Month.

“They flew us out to Hollywood in early December, all expenses paid, first class seats. It was an awesome experience,” said Robinson, who said he believed he was selected for the trip at least partly because he was an aspiring film student. “Hollywood was amazing, everything you would expect it to be. It embodied what I envisioned Hollywood to be like.”

Even though Robinson had an acting role in the commercial, the behind-the-scenes action was educational and eye-opening.

“To see the time and effort it takes to make something like this and then get to see the final product, gave me an appreciation of this field and a direct sneak-peek of what I wanted to do with my life. It was inspiring. There was a young Black male as the director and to see him fully in his element and making sure his vision came to life, was the inspiration and representation I needed.”

The 30-second commercial aired nationally during February, and although Robinson hasn’t had a chance to see it on television, he has watched it several times online. While Robinson took the brief bit of fame in stride, his younger brother was a little more excited.

“My five-year-old brother was so excited when he could see it on TV. What other five-year-old right now in their Pre-K class can say their older brother is on a McDonald’s commercial?”

With the excitement behind him, Robinson has settled back into his routine at Winston-Salem State University, attending classes, making videos, working with RAMS-TV, and doing his very best to make sure he’s on track to keep that 11-year-old’s dream alive.

“I want to pursue a career in television and film production one day,” said Robinson. “I want to create my own catalogue of Black representative television shows and films that shed a light on our complexity and diversity.”

And that success will shed great light on the power of 11-year-olds and their dreams.

WSSU retools its campus with a grant from Home Depot

The campus of Winston-Salem State University has become even more beautiful, thanks to a $20,000 grant from the Home Depot Retool Your School initiative. Home Depot is dedicated to giving back to the nation’s Historically Black Colleges and Universities (HBCUs) to honor what HBCUs bring to their communities “a strong foundation, renewed purposed and distinctive character.”

WSSU students make an impact with a march to the polls