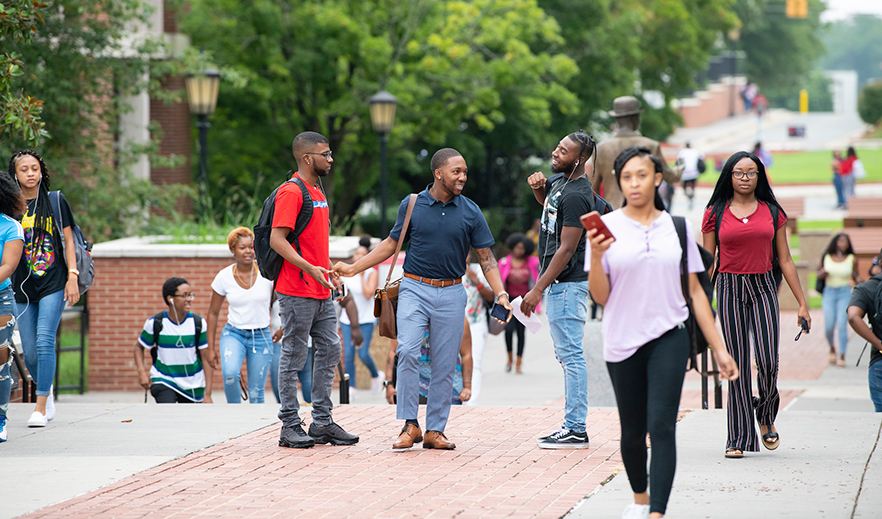 WSSU students greet each over during the first day of fall classes on Aug. 20.

WSSU was one of eight universities recognized in 2018.

The 2018 award was presented at CollegeNET’s Social Mobility Summit in Portland, Oregon.

The award recognizes universities that have ranked near the top of the CollegeNET’s Social Mobility Index over the past four years.

Other universities receiving awards were:

“The current economic trends limiting access to higher education have no place in a country that has historically touted economic opportunity, sought to broadly optimize its citizens’ potential and prepare them for participation in our democracy,” says Jim Wolfston, CEO of CollegeNET. “When a college offers a challenging environment populated with diverse ideas, personal backgrounds and viewpoints, it prepares students to encounter, navigate and appreciate the unfamiliar. Given that innovation always depends upon a person’s ability to consider what could be different from their own assumptions and experiences, economic inclusion is thus not only a solution to a social justice issue, it is a key strategy for sparking innovative minds.”

During the summit, representatives eight universities participated in a roundtable discussion on best practices for student success. Dr. Craig Richardson, professor of economics and founding director of the Center for the Study of Economic Mobility (CSEM), and Allonda Hawkins, program manager for CSEM, represented WSSU.

Richardson and Hawkins discussed how CSEM, which launched in 2017 through a $3 million grant from the Center for Advancing Opportunity, is bringing faculty and students together to study the barriers to economic mobility in the communities around the university.

Created in In 2014, the Social Mobility Index ranks U.S. colleges and universities according to how effectively they enroll students from low-income backgrounds and graduate them into promising careers.