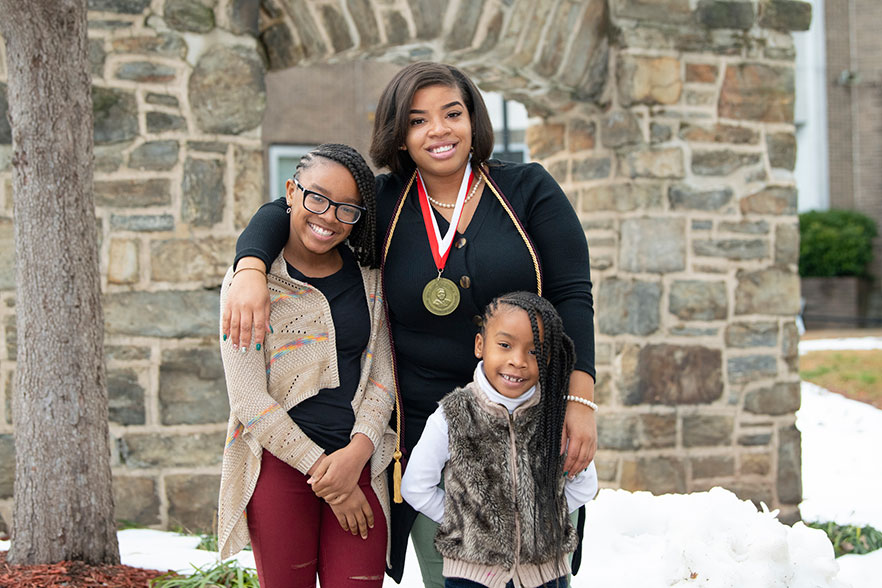 Courtney Johnson '18 had two big motivations for completing her degree: her young daughters.

Johnson achieved her goal this month, 10 years after first enrolling at Winston-Salem State University (WSSU), earning a Bachelor of Science in Healthcare Management with honors.

Johnson withdrew from WSSU after just one semester in 2008 to become a mother.

In 2016, after taking a few courses at Forsyth Technical Community College, Johnson, a mother of two daughters – Carissa and Nakari – returned to WSSU as a full-time student.

“My daughters were my biggest motivation for getting back to school,” she says.

As a student, Johnson juggled full-time employment – working third shift – along with her responsibilities as a mother. She says the support she received from faculty, staff and students at WSSU helped her succeed.

“The environment at WSSU was phenomenal. I loved interacting with other students,” she says. “And the Healthcare Management program was so inspirational to me. They never made me feel unwelcome.”

She says her boyfriend, Reggie Roberts, was “my backbone” and crucial to her success.

Johnson, a native of Rocky Mount and graduate of Rocky Mount High School, also received support from The Matthew and Anna Reilly Cullinan Emergency Grant Fund, which was established in January. The grant, administered through the Provost's Office, paid for after-school childcare expenses, allowing Johnson to complete a semester-long internship.

While at WSSU, Johnson was president of the Public Health Society and a member of two student organizations that support non-traditional students: Mommie’s in College and the Non-traditional Adult Student Organization. She also has volunteered as a Girl Scout troop leader since 2017.

Johnson was recognized for her hard work, receiving the Healthcare Management Departmental Award at the School of Health Sciences Pinning and Awards Ceremony on Dec. 14.

In January, Johnson will begin working full time at Advance Home Care, where she completed an internship during the fall semester. Long-term, she plans to pursue a master’s in public health.

For mothers who are returning to school, Johnson says time management is everything.

“You have to give yourself some time to just be yourself,” she says. 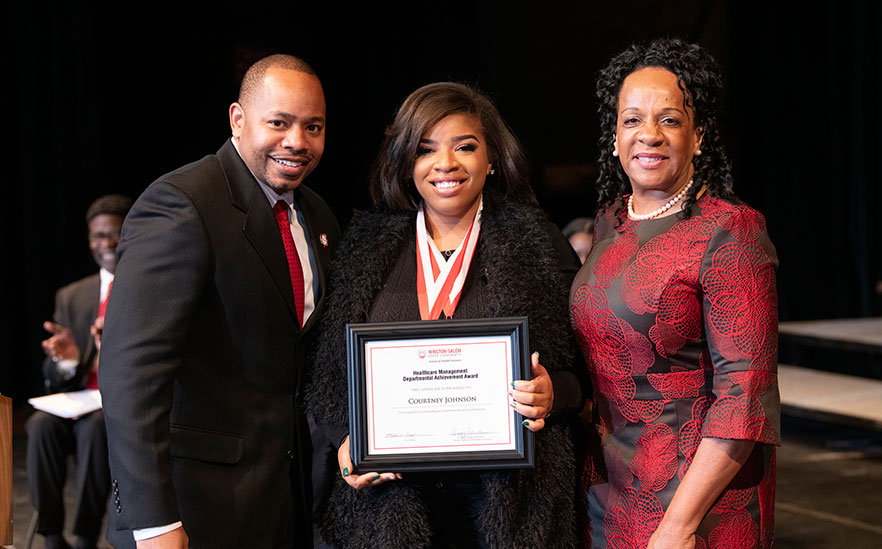 Montrale Boykin, chair of the Healthcare Management program (left), and School of Health Sciences Dean Peggy Valentine present Courtney Johnson with an award during the Pinning and Awards Ceremony on Dec. 14.